Cargill and Others Behind anti-Organic “Stanford Study”

Anti-organic “study” is not news, rather, coordinated propaganda campaign.
by Tony Cartalucci

September 5, 2012 – Harry Wallop of the London Telegraph ends his anti-organic food editorial with the following sentence:

“Tomorrow, the baby is going to get an extra dollop of pesticide-sprayed carrots.”

Whether or not Wallop is as brain-addled as he leads on to being, the point of his editorial is to encourage similar attitudes amongst the Telegraph’s readership, attempting to manipulate public perception in the wake of a recent Stanford University “study” regarding organic food. 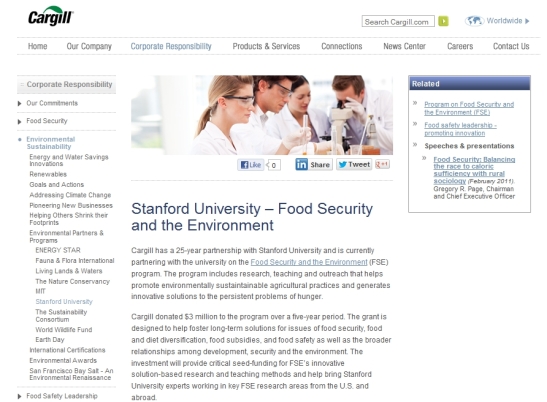 Image: Conflict of interest? Strange that Stanford University is partnered with agricultural giant Cargill and just so happens to come out with a study that suggests organic food is no better than its big-agri competition. According to Stanford University, Cargill has donated at least 5 million dollars  for the creation of a Center on Food Security and the Environment (FSE). Cargill’s website has a page describing its partnership with Stanford which can be found here. Cargill and many others also are listed as donors by Standford University in their 2011 Annual Report (page 38, .pdf).

Whether or not readers of the Telegraph will put their own health and that of their children at risk for the sake of protecting big-agri’s bottom line and the faltering paradigm that big-agri products are safe for human consumption simply because Harry Wallop thinks its good to feed his baby with pesticide-sprayed carrots remains to be seen.

The London Telegraph, when not fabricating news to support England’s latest imperial adventures overseas, is at the forefront of many of the largest corporate-financier funded lobbying campaigns. Recently, someone has splurged, and splurged big on anti-organic food lobbying built atop a suspect Stanford study.

When entire news cycles are dominated by headlines built on a single university study, with editorials attempting to hammer in big-agri talking points, a lobbying effort is clearly afoot.

Two news cycles have already been dedicated to trashing organic food. Organic food is free of pesticides and genetic manipulation, both of which are proven to cause learning disabilities, decreased IQ, sterility, and a myriad of other health problems including a wide variety of cancers.

This most recent anti-organic food campaign began with a Stanford study (and here) out of its Center for Health Policy (a subsidiary of Stanford’s Freeman Spogli Institute for International Studies), examining the nutritional value of organic food versus non-organic. Food with pesticides on it had nearly the same nutritional value, the study claims, as organic food – completely skipping over the whole point of eating organic.

Indeed, the nutritional value would be similar – but the entire point of eating organic is not because of vastly superior nutritional value, but to avoid the “extras” included with products from big-agri corporations.

The Stanford study intentionally dismisses concerns regarding the presence of pesticides by simply claiming levels were within legal tolerances. No discussion was made on whether legal tolerances equated to safe tolerances, nor was there any mention made of the harmful effects of genetically modified organisms (GMO) or other controversial food additives found in non-organic food products.

So why the strawman argument?

“The Freeman Spogli Institute for International Studies (FSI) relies on support from its friends, as well as from national and international foundations and corporations, for the funding of the Institute’s research, teaching and outreach activities.” 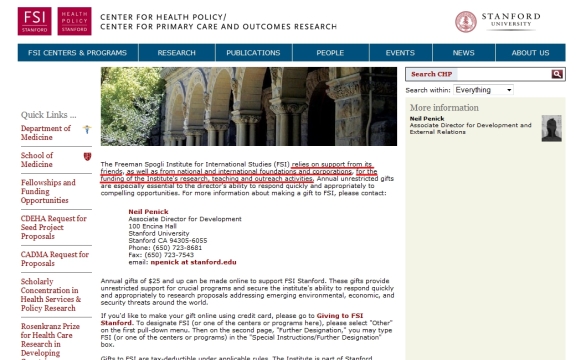 Image: From Stanford Center for Health Policy’s own website it is admitted that ” national and international foundations and corporations” fund its research and “outreach activities.” This confirms the suspicions of an increasingly aware public who saw the “study” as biased, contradictory of both logic and ethics, and the result of insidious corporate-funding.

Image: From Stanford’s 2011 FSI Annual Report (page 38, .pdf), of which the Center for Health Policy is a subsidiary, is funded by Cargill, the Bill & Malinda Gates Foundation (heavily invested in both Cargill and big-agri giant Monsanto), and a myriad of other Fortune 500 corporate-financier special interests. The report at face value is throwaway propaganda, but its funding reveals a more insidious, coordinated effort to manipulate public perception, stretching across academia, mass media, government, and big business. (click image to enlarge)

That none of this is mentioned, and the lack of independence and transparency involved in the study and its presentation to the public, overturns the credibility of both Stanford, and the Western media machine that so eagerly shoveled the results out to the public. Combined with the fact that the study itself is flawed, and the concerted, disingenuous nature with which it is being promoted to the public, a premeditated public relations campaign, bought and paid for by Stanford’s FSI sponsors, most notably Cargill and the Bill & Malinda Gates Foundation is self-evident.

Quite obviously, one should continue eating organic. Additionally, the duplicitous nature exhibited by academia, the mass media, and the vast corporate interests overtly driving them both, demands from us to redouble our efforts at implementing full-spectrum boycotts aimed at big-agri as well as other Fortune 500 corporate-financier monopolies. This includes other processed food makers such as Pepsi and Coca-Cola, Kraft, and the myriad of subsidiaries they maintain.

We should also redouble our efforts at supporting local farmers, attending and contributing to local farmers markets, and investigating the possibility of growing, if only a small percentage, our own herbs, fruits, and vegetables.

Freedom and self-determination come from economic independence, self-reliance, and self-sufficiency. The most fundamental form of economic independence is having a safe, secure, and local food supply operated for, by, and of the people. Cementing this emerging paradigm, in spite of the crass, juvenile, even criminally irresponsible editorials like that of the Telegraph’s Harry Wallop, and multimillion dollar “studies” subsidized by Cargill and the Bill & Malinda Gates Foundation, is the first step on extending this paradigm shift to other areas required for maintaining and advancing modern civilization.

This entry was posted on September 8, 2012 by Amir Alwani. It was filed under economy, food, health, news, science, studies, tyranny and was tagged with debunked.