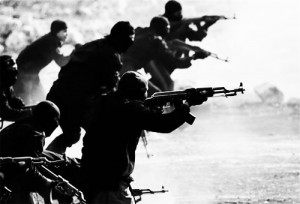 US policy think-tank Brookings Institution confirms that contrary to propaganda, US-Saudi “moderates” and Turkey-Qatar “Islamists” have been coordinating all along.

The war in Syria continues to drag on, with a recent and renewed vigor demonstrated behind an opposition long portrayed as fractured and reflecting a myriad of competing foreign interests. Chief among these competing interests, the public has been told, were the US and Saudis on one side, backing so-called “moderate rebels,” and Turkey and Qatar on the other openly backing Al Qaeda and its various franchises including the Islamic State (ISIS).

However, for those following the conflict closely, it was clear from the beginning and by the West’s own admissions that success hinged on covertly providing arms, cash, equipment, and both political and military support to Al Qaeda and other sectarian extremists, not opposed by Saudi Arabia, but rather by using Saudi Arabia as the primary medium through which Western material support could be laundered.

And this fact is now confirmed in a recent article published on the Brookings Institution’s website titled, “Why Assad is losing.”

It states unequivocally that (emphasis added):

The involvement of FSA groups, in fact, reveals how the factions’ backers have changed their tune regarding coordination with Islamists. Several commanders involved in leading recent Idlib operations confirmed to this author that the U.S.-led operations room in southern Turkey, which coordinates the provision of lethal and non-lethal support to vetted opposition groups, was instrumental in facilitating their involvement in the operation from early April onwards. That operations room — along with another in Jordan, which covers Syria’s south — also appears to have dramatically increased its level of assistance and provision of intelligence to vetted groups in recent weeks.

Whereas these multinational operations rooms have previously demanded that recipients of military assistance cease direct coordination with groups like Jabhat al-Nusra, recent dynamics in Idlib appear to have demonstrated something different. Not only were weapons shipments increased to the so-called “vetted groups,” but the operations room specifically encouraged a closer cooperation with Islamists commanding frontline operations.

Overall, Brookings is pleased to report that with the infiltration and overrunning of much of Idlib in northern Syria, it appears their long-stated goal of creating a seat of power for their proxies within Syria’s borders and perhaps even extending NATO aircover over it, may finally be at hand. Brookings still attempts to perpetuate an adversarial narrative between the West and Al Qaeda, despite admitting that it was only with Western backing that recent offensives spearheaded by Al Qaeda itself were successful.

In reality, as far back as 2007, it was the admitted policy of the then Bush-led White House to begin arming and funding sectarian extremists, including Al Qaeda, through the use of intermediaries including Saudi Arabia. Veteran journalist and two-time Pulitzer Prize-winner Seymour Hersh in his report “The Redirection: Is the Administration’s new policy benefiting our enemies in the war on terrorism?“would lay bare this conspiracy which has since then unfolded verbatim as described in 2007.

This entry was posted on May 15, 2015 by Amir Alwani. It was filed under co-opting and/or destabilization, NATO, news, Saudi Arabia, Syria, tyranny, US, war and was tagged with Brookings Institution, ISIS.