We’ve all heard of flash mobs, but can they be used for more than just organizing pillow fights in Times Square? Join James for this week’s edition of  #SolutionsWatch​ as he explores how freedom fighters are using flash mobs to carve out a space for normal human interaction in these increasingly insane times. 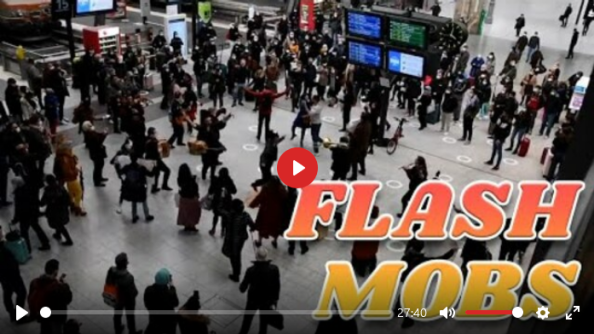 RADIO SHOW — MUST I REMIND YOU! Cybernetics, Transhumanism and the merging of Tech in Humans

The original date of this live radio broadcast was on September 6, 2020 heard on the Genesis Communications Network on radio stations.

In the first hour of EP 332 of the SUNDAY WIRE show, host Patrick Henningsen talks with special guest, UK-based public speaker, personal coach and content creator, Richard Grannon, to discuss the psychological impact of the COVID19 ‘Lockdown’ on individuals and on society as a whole. This was a fascinating conversation with insight into heady areas like psychological warfare and how people can make sense and better cope with this unusual and highly challenging situation which has affected the lives of so many. Visit Richard’s YouTube channel here:

[Potent News Editor’s note:  During July 20, 2016 at the onset/aftermath of the Augmented-Reality “Pokemon Go” craze, I released a Potent News Podcast episode titled “Pokemon, Balance, and Health Impacts of Loneliness” which was reflecting on that so-called fad and discussed the health impacts of loneliness.  Those health impacts have contributed to (and resulted from) the rampant addiction to technology.

At the time I found it a bit odd that loneliness was a topic I was covering, as not many other people seemed to be covering it or significantly appreciating how fragmented society has become.  Even to me it seemed to be “old news” that society was getting more and more lonely.  I intuitively gravitated towards this topic but why talk about this?  Wasn’t the Augmented Reality aspect and the follow-the-money aspect of Pokemon Go interesting enough on its own?  Little did I know how significant the topic of loneliness would later become.

Fast-forward to now and the above interview with Richard Grannon mentions the importance of balance with respect to making a space “safe” vs being “strong” yourself on an individual level.   This mirrors what I discussed in the podcast years ago about the significance of being too internally focused vs too externally focused, as a matter of balance, comparing Social Justice Warriors on one end of the spectrum (too external) to the New Age Movement on the other end (too internal).  With respect to the social issues we are all obviously facing on a global level now in the post-Corona world hindsight is proving to be 2020, no pun intended, and the value of knowing the health impacts of loneliness seems to higher than ever.

Many observers have noted that – as above so below – we only got to this situation of doublespeak “New Normal” and institutionalized loneliness partly because, in a sense, we were already doing social distancing for years.  We were already barely talking to each other at the dinner table and just stuck in our phones.  We were already preferring text over audio communication.   We were already physically addicted to technology to the point of isolation and social degradation emblematic of the negative manifestation of Age of Aquarius while ignoring how much the builders of Silicon Valley, etc, were already trying to shield their own children from the destructive qualities they unleashed on the world and onto themselves via these gadgets we’re all now addicted to… and for that matter, the gadgets we’re all mostly dependent on economically if this “new normal” persists and we blindly embrace the “shut-in economy” with no questions asked.

When people write or talk about “history repeating itself” many observers often don’t imagine that they can see history literally repeating itself within their own lifetimes.  They think of it in a very detached way, as though they have no role in the matter at all.  But awareness entails responsibility and we are only able to be aware of what we can do something about.  If we are too broken, we can’t look reality in the face.  Now, more than ever, we need to find balance and heal and stop brushing uncomfortable truths under the carpet.  We are often stronger than we realize and limitations are often a blessing in disguise if we choose to learn from them, choose to not be too hard/easy on ourselves, and choose to grow.  You are not defined by what happens to you.  You are defined by how you react to what happens to you.

Age of Aquarius focuses on the group (and social systems/structures, how the individual blends in with the group, how our associations impact our lives, etc) but in reality the group consists of individuals.  If they each ignore their own individuality and uniqueness then that’s not really the group, at the end of the day.  Standards are just as important as being grounded.  If we ignore our own loneliness we can’t expect to create solid social structures that stand the test of time.]

END_OF_DOCUMENT_TOKEN_TO_BE_REPLACED

Thank you so much for tuning in for another episode of Tin Foil Hat with Sam Tripoli. This episode we welcome CryptoBeast’s Steve Outtrim to discuss the Occult in Silicon Valley.

[VIDEO VERSION OF THIS EPISODE]

Jerry Marzinsky joins Bernhard Guenther to share about his discoveries practicing as a psychotherapist in mental hospitals and state prisons on this episode of the Cosmic Matrix podcast. Working with schizophrenia and other patients in psychiatry, Jerry started to question the psychiatric medical authorities and their view on and treatment/diagnosis of “mental illness.” Working with hundreds of schizophrenic patients one-on-one he realized that the “voices” in their heads were not hallucinations, nor is schizophrenia caused by a chemical imbalance in the brain but are related to entity attachments and interferences.

Jerry talks about the history of psychiatric treatments up to the modern use of pharmaceutical drugs and the resistance of the psychiatric authorities that he encountered doing his work – who tried to shut his research down. He shares his findings, treatments, and paranormal experiences as he came closer to the “topic of all topics.” Furthermore, Jerry talks about how we all are affected by these entities working through our minds via thought injections, how it is affecting the world at large, how we can protect ourselves, and much more.

Jerry Marzinsky is a licensed psychotherapist with over 35 years of experience working with schizophrenic and other psychiatric patients in state hospitals, state prisons, and hospital emergency rooms. His formal academic training comprises a B.A. in Psychology from Temple University, a Master’s Degree in Counseling from the University of Georgia, and two years of study in a Ph.D. Psychology program.

Masaki Miyagawa of Akaida.com returns to The Cosmic Switchboard Show to discuss a variety of topics including the two sided aspects of the Aquarian Age, Agenda 2030, Symbolism that has its roots in the Anunnaki Pantheon and much more.

In Part 2 Masaki talks about two key Astrological Transits and how they will affect the world financial markets and Geopolitics. Masaki also talks about Power Tools to help in this Frequency War.

A mesmerizing mix of Charles Bukowski, Hunter S. Thompson, and Philip K. Dick, Chameleo is a true account of what happened in a seedy Southern California town when an enthusiastic and unrepentant heroin addict named Dion Fuller sheltered a U.S. Marine who’d stolen night vision goggles and perhaps a few top secret files from a nearby military base.

Dion found himself arrested (under the ostensible auspices of The Patriot Act) for conspiring with international terrorists to smuggle Top Secret military equipment out of Camp Pendleton. The fact that Dion had absolutely nothing to do with international terrorists, smuggling, Top Secret military equipment, or Camp Pendleton didn’t seem to bother the military. He was released from jail after a six-day-long Abu-Ghraib-style interrogation. Subsequently, he believed himself under intense government scrutiny — and, he suspected, the subject of bizarre experimentation involving “cloaking”— electro-optical camouflage so extreme it renders observers practically invisible from a distance of some meters — by the Department of Homeland Security. Hallucination? Perhaps — except Robert Guffey, an English teacher and Dion’s friend, tracked down and interviewed one of the scientists behind the project codenamed “Chameleo,” experimental technology which appears to have been stolen by the U.S. Department of Defense and deployed on American soil. More shocking still, Guffey discovered that the DoD has been experimenting with its newest technologies on a number of American citizens.

A condensed version of this story was the cover feature of Fortean Times Magazine (September 2013).