(Download the Potent News BrainZip file featured in this video by right clicking here and choosing “Save Link As…” after downloading “The Brain” software version 8 and reading these notes.)

PODCAST — Vyzygoth and I Discuss “They Live”

This discussion dates from June 2010 and was originally published on the great Vyz’s site. Just put on the glasses. 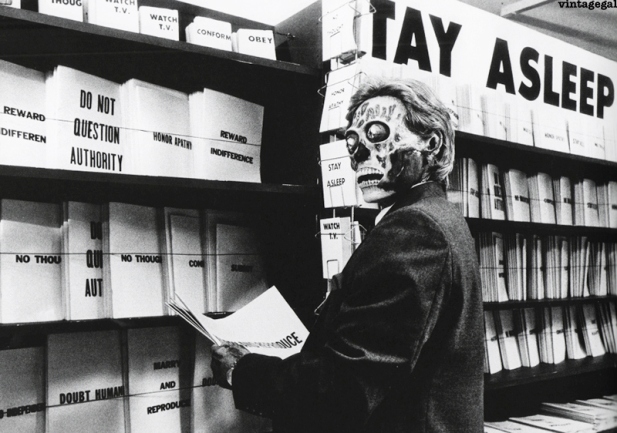 VIDEO — How Trump is The Ultimate Divide & Conquer Puppet: Duality, The Hegelian Dialectic & The NWO Hyrda 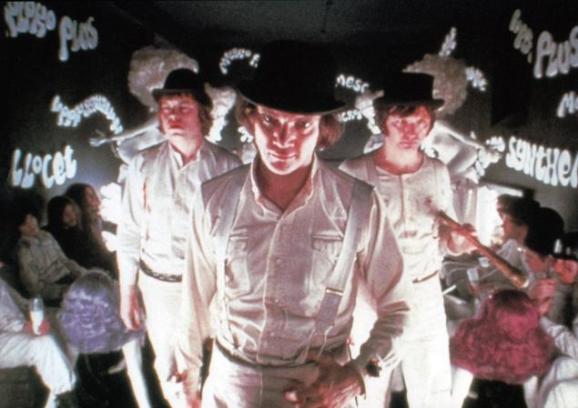 Everything’s going to the droogs.

The nationwide release of “A Clockwork Orange” was 44 years ago — on Feb. 2, 1972 — but today its star, Malcolm McDowell, says the movie was more prescient than it seemed at the time.

Based on a novel by Anthony Burgess, the Stanley Kubrick film shows “a world in which all older people stayed indoors with their televisions on,” McDowell told the News. “And that’s basically what happened.

“It’s just the young people out there doing drugs — and he foretold all this before the drug explosion.”

The film, like the book, depicts a dystopian future filled with “ultra-violence,” gangs of “droogs” and depravity at every turn. The four main characters — including McDowell’s lead character Alex — spend their free time in a bar where they drink drug-laced milk in preparation for an evening filled with violence, mayhem and even rape.

The book was released in 1962 and shooting for the film began in 1969, “so this is really before huge gang violence and drugs happened,” McDowell said.

With some of the most iconic scenes set behind bars, the prison system looms large in the world of “A Clockwork Orange” — much like in modern America. 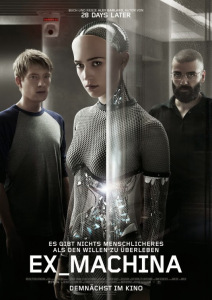 Ex Machina is the latest incarnation of the familiar Short Circuit theme we’ve seen lately – but this film does not feature the madcap antics of Johnny 5 seducing Ally Sheedy. In Ex Machina, the bots are babes, and the babe bots are not happy about their male masters, and Steve Gutenberg is not one of them.  However, there is a lot of sexual innuendo and robo fetish in this download, and as you can imagine with a JaysAnalysis analysis, there’s a deeper, esoteric meaning!  Boot up your floppies and polish your laser discs because if there’s anything we can learn from Ex Machina, it’s that you can make a chick perfect and she still ain’t happy.

For most nerds, the robobabe is some kind of fantasy, but Ex Machina has an important lesson to teach all nerds: give up that pipe dream.  Recalling iconic imagery from Speilberg’s A.I., PKD and Blade Runner, here we have the archetypal tech geek who is coaxed into meeting a tech elite at his underground mountain facility following winning a “contest.”  As a low-level coder at Bluebook, the world’s largest search engine, Caleb Smith (Domhnall Gleeson) discovers his CEO, Nathan Bateman’s (played by Oliver Isaac) home is actually a research facility for super advanced A.I.   Guarded by levels of security requiring key cards and shrouded in secrecy, Bateman’s zen architecture provides a stark contrast of cold techno logic against the lush green of the mountain forests, foreshadowing the coming faceoff between nature/man and A.I.  As with 2001: A Space Odyssey, man specifically will square off, not against the masculine HAL, but the feminine Ava (played by Alicia Vikander).

Caleb is instructed by Nathan to perform a series of Turing tests on Ava to see if she can pass by fooling him into thinking she is self-aware.  Boozing his way through the film, Nathan’s shady side gradually emerges as it becomes evident he is lying to Caleb.  Modelled on a seven-day week patterned after the days of creation in Genesis, each day Caleb conducts a “session” with Ava that involves a series of questions between them, as Nathan watches each session from his panoptic surveillance system.  Dating herself as “1,” Ava refuses to specify whether she is one day or one year old, indicating (following the climax) that she is not concerned with dates because she is the new number 1, the first, as a fembot replacement of Adam.

With lifelike precision, Ava is able to perfectly mimic human emotions and manipulate Caleb into thinking she is self-aware and experiences emotional attachment to him.  Utilizing his weakness as a horny, single tech geek, Ava we find has profiled Caleb from the beginning, and rather than winning a competition, the real study is not Ava, but a deep psychological operation on Caleb to see if he can be manipulated by A.I.  Nathan has planned all along to deceive Caleb into thinking he is special, and through mass surveillance data collected globally, Nathan is able to construct the perfect A.I. deception based on Caleb’s online footprint and psych profile.

Readers will recall that I highlighted in this very idea in past articles, explaining that social media and search engines themselves are designed ultimately to provide the synthetic version of the subconscious for the “global brain.”  The global brain is a real plan, and as highlighted in my analysis of Spike Jonze’s Her, it will be linked into the supercomputers, the Internet of Things, and the mass data from search engines and social media.  All of this is explicitly stated and revealed in the plot of Ex Machina, even to the point of Caleb sounding like he was reading directly from JaysAnalysis articles – that problems in the philosophy of linguistics and pattern recognition would be central to avoiding the Godelian “loop” of determined reactions, that might be circumvented by linking the A.I. to the “global brain.” As I wrote in reference to Her:

There’s also a goat skull on the antagonist’s wall in one of the opening scenes.

Later when the antagonist tells the protagonist about the AI he just created:

Also, much of the film takes place indoors whereby you see a red carpet in the hallway countless times, reminding us of Hollywood’s red carpet which many of us know symbolizes bloodlines.]