VIDEO — Iranian General Killed by U.S. Airstrike – By the Numbers

[related video: The Assassination of Soleimani: What You Need to Know]

END_OF_DOCUMENT_TOKEN_TO_BE_REPLACED

VIDEO — URGENT!!! The Most Important Vaccine Conversation EVER Heard

Todd sits down with Dr.Gerry Bohemier, Leona Rew, and Gloria Dignazio to discuss their experiences with vaccines damaged children, vaccine injuries and the legal issues people face when pointing the finger at vaccines for hurting their child or loved one. The lobbying by big pharma to push vaccines, make them mandatory and regulate and squeeze out natural cures and remedies is also discussed.

Mandatory vaccinations are now a reality in the United States and if you refuse to take the shot they warn it’ll cost you! New York City has issued civil summonses to 12 people it said were not complying with a mandatory measles vaccination order and they must now attend a hearing and face a fine of up to $1,000 if found to be noncompliant. In this video Dan Dicks and Leigh Stuart of Press For Truth cover the latest updates on the mandatory vaccine order issued to a small neighbourhood in Brooklyn NYC targeting children in Orthodox Jewish communities who may or may not have immunity against the measles.

For Chinese New Year 2019, I made a video on MANDATE OF HEAVEN. A key concept in Chinese Culture, and how it relates to thoughtforms, the cycles of civilization and the conciousness of people. Video made possible from my PYRAMID POWER patrons.

END_OF_DOCUMENT_TOKEN_TO_BE_REPLACED

Evidently, a test run for smart pavement in Colorado that I reported on back in May 2018 was successful enough to give it the all systems go.

A plan to turn a portion of Interstate 70 into a roadway where cars communicate with street lights, signs and other internet-connected things just tripled to more than 500 miles.

Colorado’s “internet of roads” project will now extend to highways that reach from Pueblo to Wyoming, and Sterling to Utah, after the state Department of Transportation was awarded a $20 million federal grant earlier this month.

The article’s author goes on to tout the many potential benefits to driver safety, although there were no definitive studies revealed to support those claims. 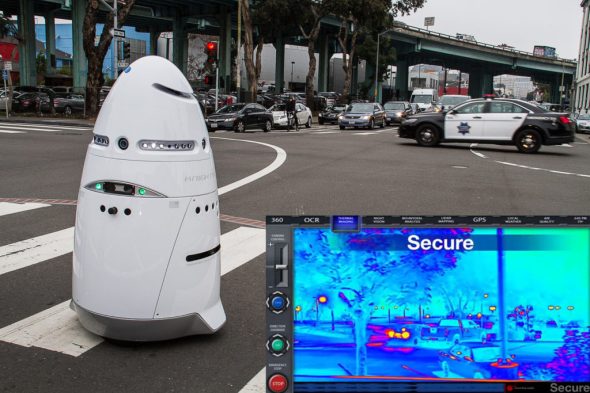 Security robots have invaded NYC and are now patrolling the streets, while diplomatic robots are roaming around UK parliament floors.

Robots are becoming more prevalent and relevant in society and, like it or not, the androids are here to stay. This  technology will only exponentially increase as time passes, as Boston Dynamics has showcased over the years.

Now thanks to that little idea of creating robotic cretins there are security cyborgs patrolling in the tri-state area.

These robots use five cameras including one that is thermal vision to observe their surroundings, and CBS reports they can even talk back to you (a creepy scary fact.)

The robots are able to scan anyone walking on the sidewalks, record license plates, use infrared vision, and one of the scariest uses of this technology is the capability to detect cellphone serial numbers within a designated patrolling area.

According to CBS, the devices are actively being used and can be seen in 16 states including New York at the Lefrak City Apartments in Queens and LaGuardia Airport.

Recent happenings have residents in a panic over privacy concerns and they are rightfully alarmed.

Once again the company responsible, Knightscope, says the data is secured and is only seen by the security agency controlling the robot. But perhaps that’s the most frightening part — not knowing who has control of your data, including cell phone IMEI. This robot rollout is daunting to say the least.

It was only a few years ago when people argued against the use of drone cameras due to privacy violations. Now we have surveillance drones roaming the streets of certain properties … my how times have changed.

Meanwhile, on the other side of the pond in the UK, a robot was seen on the floor of UK parliament. MPs on the education committee invited a robot named Pepper to Parliament for a committee hearing on artificial intelligence (AI) and “the fourth industrial revolution” for a long discussion about the future of human and robot relations.

When Pepper was asked where humanity stands in a world run by AI, Pepper responded, “Robots will have an important role to play, but we will always need the soft skills that are unique to humans: to sense, make, and drive value from technology.”

END_OF_DOCUMENT_TOKEN_TO_BE_REPLACED

Historian David Livingstone, author of Transhumanism – History of a Dangerous Idea and Black Terror, White Soldiers joins me to discuss his forthcoming book Ordo Ab Chao and his research into the connections between the Fascist International, Freemasons, Zionism, the KKK, Discordianism, Alex Jones, Trump, Russia, and more.

[Vimeo version of this video – downloadable for offline viewing]

END_OF_DOCUMENT_TOKEN_TO_BE_REPLACED

VIDEO — Something Unprecedented Is Happening at Bilderberg 2018

The O.J. Simpson murder trial of 1995 captivated the entire nation and became the talk of every water cooler in America. It was labeled “The trial of the century”, and remains the most popular court trial of all-time.

There’s just one problem: It was all a lie.

Watch this video to see how this entire event was a masonic ritual, coded to the teeth with the number 33. It was the perfect date, with the perfect victims, for the perfect defendant to be found Not Guilty. All as a show to keep you oblivious to the workings of the real world.