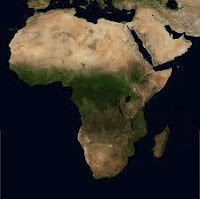 In a report from the World Bank, Africa’s economic development was outlined as a “golden opportunity for a green future”.

“The Africa Carbon Forum is where potential projects and developers and funders can meet, exchange ideas, and – it is hoped – take the concrete steps toward greening Africa’s future.”

The ACF held a conference where policymakers, project developers, and private investors discussed climate-smart agriculture, public and private partnerships and funding for projects. However, it is clear that Africa holds more promise than just the inception of carbon emission reduction and carbon finance.

The attraction of Africa is its rich wealth of natural resources. This continent contains enormous deposits of diamonds, cobalt, copper, uranium, magnesium and tin. Over $1 billion in gold is mined each year.

The UK’s Department of International Development, along with researchers from the British Geological Survey and the University of London found underground aquifers of clean and untouched water in Africa that are 100 times the amount found on the surface of the continent.

Through the convergence of multi-national corporations onto Africa, there has been an obvious initiative to corporatize the continent’s resources.

An $11 million dollar project funded by the Bill and Melinda Gates Foundation and the Coca-Cola Corporation are employing 50,000 Kenyan and Ugandan smallholders to produce fruit for Minute Maid, a subsidiary for Coca-Cola.

The UN has announced plans to allow corporations and foreign governments to land grab in African nations like Ethiopia, South Sudan, Democratic Republic of Congo and Sierra Leone.

Africa has “voluntarily” signed agreements with multi-national corporations and foreign investors, allowing them to control agricultural land. The nation’s leaders believe that giving access to their resources will benefit their people; however this is just another manipulative ploy to coercively acquire control over land, food production and securitization.

The document entitled “The UN Global Compact and the OECD Guidelines for Multinational Enterprises” outlines through “voluntary” means how the UN will implement their international guidelines with respect to corporate conduct, standards and abilities.

The UK, multi-national corporations, some African countries and other G-8 nations will be joined together as the New Alliance for Food and Nutrition Security (NAFNS).

The CEOs of 40 US privately owned corporations have pledged $3.5 billion in food and nutritional assistance alongside the government.

The New Alliance for Food and Nutrition Security will be established to carry out collaborative efforts with private investors and corporations, under the oversight of Obama. The initiative will implement model farms and training centers.

Yet, it is not just the securitization of agriculture, natural resources and water that is attracting corporations, the UN and Obama to Africa.

Africa is to be transitioned into a technological hub, focusing on technology research. Under the promise of employment opportunities and improving educational institutions, the actual agenda is the diversification of strategies with foreign partners that will facilitate manufacturing industrialization and technological development through the corporate takeover of Africa.

Under careful control, the UN has planned to create an Africa that will become not only the food center of the world, but also the single processor of the world’s communications.

The ICT Sector Unit, a department of the World Bank, has plans to turn Africa into a centralized internet epicenter where the flow of information and communications are under UN governance.

The ICT is a specialized department controlling “policy and regulatory matters, in eGovernment, information technology, innovation and the enabling environment. This Unit promotes access to information and communication technologies in developing countries.”

They will provide governments and private organizations with the directives and capital to infiltrate Africa through corporatism. The creation of infrastructure and eGovernment projects will be handled solely through the ICT.

The ITU is the UN’s information and communication technologies agency. They “allocate global radio spectrum and satellite orbits, develop the technical standards that ensure networks and technologies seamlessly interconnect, and strive to improve access to ICTs to underserved communities worldwide.”

By whatever means necessary, their goal is to facilitate the flow of communication; which is completely under their dominion.

One initiative already in progress is the Square Kilometre Array (SKA) radio telescope project; a $2 billion investment that is meant to be the biggest research instillation in the world.

The enormous computing power this installation is capable of will “take the current global daily Internet traffic and multiply it by two, and you start to approach the stupendous scales of data the Square Kilometre Array will churn out daily — about an exabyte per day. This vastly outpaces the state of the art in computing,” notes Ton Engbersen of IBM Research in Zurich. “The area you would need for PCs is larger than the SKA.”

Billions are being poured into the development of this project by foreign investors. On April 4th, the SKA Organization held a two-day meeting in The Netherlands, concluding with a press statement that they want to take an “inclusive approach” to the location of the project.

That location has become the continent of Africa.

The project would be a joint venture between the governments of South Africa and other participating nations, but the majority of costs would come from the privately funded SKA Organization.

The SKA project is part of the ICT’s plan to create a broadband universal portal that will be the access point by which online resources and information are disbursed throughout the world.

Under the Broadband Commission for Digital Development , the UN’s Millennium Development Goals will be met as their universal portal will become the centralized broadband Internet provider to the world.

The ITU will be in conference at the end of this year, with major telecommunication and information corporations to devise a treaty that will regulate important aspects of the Internet, as well as create jurisdiction over telecoms and ICT industries. This international treaty will effectively control all communication as we know it.

The treaty will give the UN unilateral governance over the Internet, as well as telecommunication issues such as accounting rates and termination charges for next-generation networks, data privacy, cyber security, international mobile roaming, and equipment specifications.

Africa is going to be the centralized network of global controls that force all other nations and countries to become dependent upon the UN.

This is how the UN ultimately plans to achieve global governance.

You can help support this information by voting on Reddit HERE.

Susanne Posel is the Chief Editor of Occupy Corporatism. Our alternative news site is dedicated to reporting the news as it actually happens; not as it is spun by the corporately funded mainstream media. You can find us on our Facebook page.