Police are run out of Hyde Park after attempting to storm a peaceful musical protest by the band Jam For Freedom near Speaker’s Corner. Bottles, Flares, Scooters, Insults and Pears are hurled. Continuing the Anti-Lockdown Freedom Protests of 24/04/21.

VIDEO — The Subliminal Message in This Commercial Is Trying to Warn Us of Something!

[Potent News editor’s note: This video shows boosted sound volume in a commercial showing what could be quiet subliminal messages about authorities containing an “outbreak” and implementing “martial law”. We can add that to noticing, like I said before, that seemingly right before the onset of this corona virus outbreak was the convenient premier of a new Netflix docu-series called “Pandemic”.

This video also notes that evidently Dean Koontz’s old novel “The Eyes of Darkness” featured a virus that was taking over the world and the video shows that in the (2008 version of the) novel the virus was actually called Wuhan-400 (while the 1981 version had the virus be titled “Gorki-400” instead).

Gematria corroborates the connection between Dean Koontz’s novel and Corona Virus, between the Corona Virus and genetic engineering, and between good health and biotechnology (such as the Rife machine which may be used to blast the virus with frequency to basically shake it to death like an opera singer breaks a wine glass):
“The Corona Virus” = 75 (Jewish Reduction) 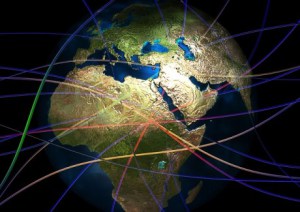 via The Economic Collapse Blog
by Michael Synder
Sep 24, 2015

Right now, stock market wealth is being wiped out all over the planet, and none of the largest global economies have been exempt from this.  The following is a summary of what we have seen in recent days…

#1 The United States – The Dow Jones Industrial Average is down more than 2000 points since the peak of the market.  Last month we saw stocks decline by more than 500 points on consecutive trading days for the first time ever, and there has not been this much turmoil in U.S. markets since the fall of 2008.

#2 China – The Shanghai Composite Index has plummeted nearly 40 percent since hitting a peak earlier this year.  The Chinese economy is steadily slowing down, and we just learned that China’s manufacturing index has hit a 78 month low.

#3 Japan – The Nikkei has experienced extremely violent moves recently, and it is now down more than 3000 points from the peak that was hit earlier in 2015.  The Japanese economy and the Japanese financial system are both basket cases at this point, and it isn’t going to take much to push Japan into a full-blown financial collapse.

#4 Germany – Almost one-fourth of the value of German stocks has already been wiped out, and this crash threatens to get much worse.  The Volkswagen emissions scandal is making headlines all over the globe, and don’t forget to watch for massive trouble at Germany’s biggest bank.

#5 The United Kingdom – British stocks are down about 16 percent from the peak of the market, and the UK economy is definitely on shaky ground.

#6 France – French stocks have declined nearly 18 percent, and it has become exceedingly apparent that France is on the exact same path that Greece has already gone down.

#7 Brazil – Brazil is the epicenter of the South American financial crisis of 2015.  Stocks in Brazil have plunged more than 12,000 points since the peak, and the nation has already officially entered a new recession.

At least 80 people — both police and protesters — have been injured as street battles broke out in Rome, with rocks being flung and police deploying pepper spray – READ MORE http://on.rt.com/kxq34x

While the Crimean referendum tops world media headlines, an attempt at secession is going on in Veneto, Italy, with its major city Venice. But as it is being virtually ignored by media, people in Europe are hardly aware of what’s happening next door. READ MORE: http://on.rt.com/7f5f3n

[related: Venice votes in referendum on splitting from Rome]

Syria’s Chemical Weapons Stockpiles to be Transferred to the Italian Mafia?

Does the disposal of Syria’s chemical weapons by the two selected waste disposal companies, namely Finland’s Ekokem and France’s Veolia require a contractual arrangement (or “agreement”) with Italy’s most powerful criminal syndicate on behalf of the Nobel Peace Prize winning Organisation for the Prohibition of Chemical Weapons (OPCW)?

Read down. Its a long saga…

On September 12, last year, Syria’s President al-Assad committed to surrender Syria’s chemical weapons, with the caveats that the United States must stop threatening his country and supplying weapons to the terrorists. He has been as good as his word. The same cannot be said for the US and its boot licking allies.

Three days earlier US Secretary of State John Kerry – who had been killing Vietnamese in the US onslaught on Vietnam as American ‘planes rained down 388,000 tons of chemical weapons on the Vietnamese people (i) – had threatened Syria with a military strike if the weapons stocks were not surrendered within a week, stating that President Assad: “isn’t about to do it and it can’t be done.”

The ever trigger-happy Kerry was right on the second count, it can’t be done for two reasons, extracting dangerous chemicals from a war zone is, to massively understate, a foolhardy and hazardous business. Additionally it seems having received Syria’s agreement, the “international community” and the Nobel Peace Prize winning Organisation for the Prohibition of Chemical Weapons (OPCW) had no disposal plan in place and had not a clue what to do with them, whilst at every turn Syria is blamed.

As ever double standards and hypocrisy rule. According to CNN (10thOctober 2013):

“The United States estimates it will be at least another decade before it completes destruction of the remaining 10% of its chemical weapons, estimated at more than 3,100 tons.”

And Syria? “U.S. intelligence and other estimates put its chemical weapons stockpile at about 1,000 tons.” they are believed to be “stored in dozens of sites”, in the circumstances a logistical nightmare and a massive danger to the public and those driving them to be insisting on transporting them anywhere.

CNN also quotes Wade Mathews who had worked on “the U.S. project to destroy its chemical stockpile” who doubted that Syria could meet the deadlines. The US operation, he said: “took billions of dollars, the cooperation of many levels of government – including the military – and a safe environment to make sure the destruction was done safely.”

“We had a coordinated effort, we had a government that insisted that it be done safely and that the community was protected … I don’t think those things are in place in Syria.”

Shopping Around for a Country to Destroy the Weapons

Having received Syria’s compliance, the OPCW started shopping around for a country -any country it seems – to destroy the weapons. Norway, approached by the US, was first choice. They declined, since the country had no experience in dealing with chemical weapons, the Foreign Ministry website stating: “… Norway is not the most suitable location for this destruction.”

If You Are Waiting For An “Economic Collapse”, Just Look At What Is Happening To Europe

If you are anxiously awaiting the arrival of the “economic collapse”, just open up your eyes and look at what is happening in Europe.  The entire continent is a giant economic mess right now.  Unemployment and poverty levels are setting record highs, car sales are setting record lows, and there is an ocean of bad loans and red ink everywhere you look.  Over the past several years, most of the attention has been on the economic struggles of Greece, Spain and Portugal and without a doubt things continue to get even worse in those nations.  But in 2014 and 2015, Italy and France will start to take center stage.  France has the 5th largest economy on the planet, and Italy has the 9th largest economy on the planet, and at this point both of those economies are rapidly falling to pieces.  Expect both France and Italy to make major headlines throughout the rest of 2014.  I have always maintained that the next major wave of the economic collapse would begin in Europe, and that is exactly what is happening.  The following are just a few of the statistics that show that an “economic collapse” is happening in Europe right now…

-The unemployment rate in the eurozone as a whole is still sitting at an all-time record high of 12.1 percent.

-It Italy, the unemployment rate has soared to a brand new all-time record high of 12.7 percent.

-The youth unemployment rate in Italy has jumped up to 41.6 percent.

-The level of poverty in Italy is now the highest that has ever been recorded.

-Many analysts expect major economic trouble in Italy over the next couple of years.  The President of Italy is openly warning of “widespread social tension and unrest” in his nation in 2014.

-Citigroup is projecting that Italy’s debt to GDP ratio will surpass 140 percent by the year 2016.

-Citigroup is projecting that Greece’s debt to GDP ratio will surpass 200 percent by the year 2016.

-Citigroup is projecting that the unemployment rate in Greece will reach 32 percent in 2015.

-The unemployment rate in Spain is still sitting at an all-time record high of 26.7 percent.

-The youth unemployment rate in Spain is now up to 57.7 percent – even higher than in Greece.

-The percentage of bad loans in Spain has risen for eight straight months and recently hit a brand new all-time record high of 13 percent.

-The number of mortgage applications in Spain has fallen by 90 percent since the peak of the housing boom.

-The unemployment rate in France has risen for 9 quarters in a row and recently soared to a new 16 year high.

-For 2013, car sales in Europe were on pace to hit the lowest yearly level ever recorded.

-Deutsche Bank, probably the most important bank in Germany, is the most highly leveraged bank in Europe (60 to 1) and it has approximately 70 trillion dollars worth of exposure to derivatives.

Europe truly is experiencing an economic nightmare, and it is only going to get worse.

It would be hard to put into words the extreme desperation that unemployed workers throughout Europe are feeling right now.  When you can’t feed your family and you can’t find work no matter how hard you try, it can be absolutely soul crushing.

In the midst of a financial storm, Italians are turning their backs on the designer brands that have made their country world-famous. And they are increasingly turning to Chinese producers for cheap goods, sometimes even labeled ‘Made in Italy’.

VIDEO — Protesters clash with police during Hollande-Letta meeting in Rome

Several hundred demonstrators clashed with police in Rome on Wednesday, during a meeting between French President Francois Hollande and Italian Prime Minister Enrico Letta. Riot police deployed tear gas and baton charges against crowds gathered in the Campo de Fiori, with an unknown number of arrests made.

One of the protesters facing the police said: “This town needs to have freedom of protest and you (the police) are not granting our right!”

Hollande is visiting Rome for the Italy-France bilateral summit. One of the topics on the agenda is realization of high-speed railway line between Turin and Lyon. Protesters oppose to the construction of the infrastructure which while run through the small Alpine village.