TRIPLE TERROR ATTACK: What’s Behind the Events in France, Tunisia and Kuwait?

The triple terror attacks seen in France, Tunisia and Kuwait appear to mark another set of tragic events. However, when you peel back the media hysteria, all three of the alleged ISIS related incidents raise a number of interesting questions..

‘The Mask of Security’ –  The Research and Intervention Brigades, (BRI) seizing a suspect after an apparent attack on French factory near Lyon in southeastern France. (Photo link baodongnai.com)

The French BRI, who are are an elite law enforcement unit of the French Ministry of the Interior, have been known to monitor suspects prior to a crime taking place. This echoes a similar investigative tactic in the US, as the FBI has often been linked to a person or persons before an alleged attack through lengthy surveillance protocols.

A primary example of this was the series of events that unfolded in Garland, Texas recently.

Back in May, the anti-Islamic media personality Pamela Geller, who is the president of  the well-funded organizations, the American Freedom Defense Initiative, and Stop the Islamization of America, organized a “Prophet Mohammed Drawing Contest” in Garland, Texas. The event allegedly became a target of two ‘ISIS inspired’ shooters. However, it was quickly revealed that the FBI had known at least one of the apparent shooters well before the seemingly orchestrated attack.

As we previously outlined here at 21WIRE, Elton Simpson, one of perpetrators listed in the Garland fiasco, had been under the watchful eye of the FBI for nearly a decade and was in close contact with an undercover informant during that time.

Fast forward to the recent attack in France…

French Prosecutor Francois Molins, said that security services were well aware of the suspect charged in an apparent beheading and gas canister explosion at the American owned Air Products factory in France. An early report from CNN, exposed the ties between the French security services and the alleged suspect, Yassin Salhi, as the Mayor of a town close by had easily been able identify the suspect charged in the apparent attack:

“Raymond Feyssaguet, the mayor of the nearby town of Villefontaine, identified the suspect as Yassin Salhi.

Grisly Peshawar Slaughter – Who Created Taliban, Who Still Funds Them? 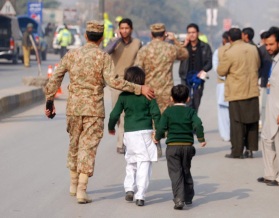 December 16, 2014 (Tony Cartalucci – LD) Taliban militants stormed an army public school in the northern city of Peshawar, killing over 100, including many young students. It is believed up to 10 militants took part in the attack, dressed as soldiers to first infiltrate the school’s grounds before beginning the attack.

While the details of the attack are forthcoming, the background of the Taliban and the persistent threat it represents is well established, though often spun across the Western media.


Who Put the Taliban into Power? Who is Funding them Now?

In the 1980’s the United States, Saudi Arabia, and elements within the then Pakistani government funneled millions of dollars, weapons, equipment, and even foreign fighters into Afghanistan in a bid to oust Soviet occupiers. Representatives of this armed proxy front would even visit the White House, meeting President Ronald Reagan personally.

The “Mujaheddin” would successfully expel the Soviet Union and among the many armed groups propped up by the West and its allies, the Taliban would establish primacy over Kabul. While Western media would have the general public believe the US rejected the Taliban, never intending them to come to power, it should be noted that the Afghans who visited Reagan in the 1980’s would not be the last to visit the US and cut deals with powerful American corporate-financier interests.

As of now, Kuwait is hosting its first Arab League Summit. The slogan for this year’s Summit is “Solidarity For A  Better Future”. Question is: will the Kuwait Summit ensure solidarity for the region?

It is a well known fact that the Arab World has seen its own share of regional alliances formed on the basis of ideological, sectarian and regional dynamics. With the recent cases of the Arab Spring, such dynamism has become all the more complicated and thus, regional solidarity is surely a challenging task to accomplish.

Back in the 1950s-60s, the Arab World was divided into two factions: pro-Soviet Arab nationalists led by Egypt, and pro-West conservatives led by Saudi Arabia. The division between the two factions was so paramount that Malcolm Kerr termed it as The Arab Cold War.

Alignments changed in the year 1978 after the signing of the Camp David Accord, when Egypt decided to quit the Arab-Israeli conflict. Both Syria and Iraq tried their best to isolate Egypt after Camp David, but the situation refused to remain static. Following the Islamic Revolution of 1979 in Iran, Iraq’s attention shifted towards Iran, and the Arab World witnessed another set of factionism. This time, countries such as Syria, Libya and Algeria sided with Iran, whereas the Gulf States, Egypt and Jordan aided Iraq.

Things soon went out of control when Saddam Hussein, the then leader of Iraq, decided to invade Kuwait. Yemen and Jordan supported Iraq in rhetoric, whereas most of the Gulf States aided the US-led alliance to drive Saddam Hussein out Kuwait. This round of musical chairs continued right until the early 1990s, when the Madrid Peace Conference was held and a dual containment policy was forwarded to keep a check on both Iran and Iraq, under the observation of USA, Saudi Arabia, Syria and Egypt.

The policy of dual containment remained in effect until 2003, when USA decided to invade Iraq and eliminate Saddam Hussein. Thereafter, a new regional factionism emerged. This time, the Gulf States (with the possible exception of Qatar), Egypt and Jordan decided to be the moderate voice in the region, whereas Iran, Syria, Hamas and Hezbollah emerged as the new axis of resistance against the US. The war in Lebanon (2006) and Israel’s attack against Hamas in Gaza further widened the gap.

Then came the phase of the Arab Spring revolutions, which made the picture all the more complicated. While proponents of the Arab Spring surely talked a good deal about freedom and liberty, its ideological blindness became well evident. A movement that refused to distinguish between the more moderate Hosni Mubarak and the comparatively radical Bashar al-Assad is confused at best, directionless at worst.

As of now, the region has three major groups, each with its own ideological, sectarian and geo-political agenda to pursue.

First, we have the pro-Shiite camp, which is led by the Maliki government of Iraq and Bashar al-Assad’s regime in Syria.

Second, there is the counter-revolution group, led by Saudi Arabia and supported by UAE, Jordan and possibly Egypt.

Third, we have the moderate elements, such as Turkey and Qatar, that are trying to server as a balancing force in the region.

There is not much to talk about the first group, simply because has a clearly-defined gameplan of its own — siding with Shiite regimes and factions wherever possible.

The second group, however, is trying hard to keep the eerily confused and horribly chaotic Arab Spring revolutions at bay. Saudi Arabia, for instance, offered to host the deposed President(s) of both Egypt and Tunisia, Hosni Mubarak and Zine al-Abidine Ben Ali respectively. Even more so, in spite of its animosity with Gaddafi, Saudi Arabia expressed no support for the Libyan Revolution either. In fact, the only reason Saudi Arabia is supporting Syrian Revolution is because if al-Assad’s regime survives, the Shiite faction under Iran will become a regional hegemon.

The third group, on the other hand, is pushing for peace, and calls for the restoration of democracy in Egypt.

Quite obviously, the Middle East has a good number of challenges to tackle and achieving true solidarity is an uphill task.

The Emir of Kuwait, Sheikh Sabah al-Ahmad, has been trying for quite some time to melt the ice between Qatar, Egypt and Saudi Arabia. Yet, this three-way battle in the region is way too complicated to be tackled easily and this makes the purpose of this year’s Arab League Summit all the more difficult.

Therefore, as the host country of this year’s Summit, Kuwait needs to mend fences between rival brothers and ensure that regional hiccups do not escalate into a full-fledged crisis.

Sufyan bin Uzayr is the author of “Sufism: A Brief History”. He writes for several print and online publications, and regularly blogs about issues of contemporary relevance at Political Periscope (www.politicalperiscope.com). You can also connect with him using Facebook (http://facebook.com/sufyanism) or Google+ (https://plus.google.com/+SufyanbinUzayr?rel=author) or email him at sufyan@politicalperiscope.com

A Kuwaiti court has sentenced a youth activist for allegedly defaming the country’s ruling emir on Twitter. The opposition tweeter is the second person to fall foul of a recent government crackdown on social networking sites in Kuwait. READ MORE: http://on.rt.com/6siif3