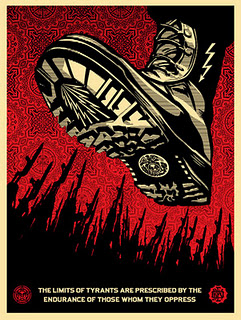 America has fully embraced the trickle down tyranny; torture and all forms of sadism have now been loosed upon adults and children alike.

Earlier in the week an article by Rania Khalek at AlterNet documented how “non-lethal” weapons are now being deployed on “disobedient” school children in increasing numbers through taser-equipped School Resource Officers.

The most fragile and weakest among us are clearly not immune to the new torture doctrine of the United States, which has rolled back speedily toward medieval times.

YouTube is filled to overflowing with incidents of police brutality among common citizens, as well as in highly publicized atrocities like the stomping to death of mentally handicapped Kelly Thomas.

The outrages of the police state apparatus have only been enhanced by the Orwellian-termed “non-lethal” weaponry at its disposal.  These non- and less-than-lethal weapons nearly all have their root in torture and intimidation, rather than legitimate attempts to reduce casualty numbers and protect crowds as is suggested by authorities.

We have entered an era of madness, as the insightful article by Rania Khalek referenced above articulates, through her chronicle of non-lethal weapons, their origin, and their current proliferation as a weapon in the war on . . . everybody.

When humiliation, fear, and pain are accepted as a valid tools in managing human behavior — especially children, — anything becomes possible.

And that “anything” is stuffing an autistic boy in a duffel bag, leaving him in a school hallway, and having everyone involved justify or downplay the situation.  After all, it’s just a “therapy bag” according to school officials

As a teacher’s aide stood by, the mother of the child arrived to find that her 9-year-old son “was treated like trash and thrown in the hallway,” according to an Associated Press report.  However, the author of the article actually interjects that, “She did not know exactly how long he had been in the bag, but probably not more than 20 minutes (emphasis added).”  That is the author of the article; paid to report facts, not downplay the length of time and the horror of being stuffed in a bag by people in a position of trust and care.  As if 19 minutes would have been OK.

The school is predictably quiet on the issue, as “Mercer County schools Interim Superintendent Dennis Davis said confidentiality laws forbid him from commenting,” but “‘The employees of the Mercer County Public Schools are qualified professionals who treat students with respect and dignity while providing a safe and nurturing learning environment,'” Davis said in a statement.

Saddest of all, perhaps, is the reaction of a quoted advocate for the autistic who was “outraged.”  You be the judge at the level of outrage, and please leave your comments below:

Landon Bryce of San Jose, Calif., a former teacher who blogs about issues related to autism, said the school’s treatment of Chris was ‘careless and disrespectful.’

If you believe that these measures were tantamount to torture and would like to help educate the school officials who were responsible, their contact information is HERE.

This entry was posted on December 25, 2011 by Amir Alwani. It was filed under education, news, police state, tyranny .