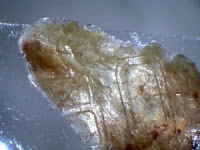 Imagine having the mental prowess to be able to create living filaments heretofore unknown, that can reproduce themselves, some of which come with identifying letters embossed on them, and then to make them extrude from beneath your skin, all against your conscious will.

Sound like science fiction?  It’s not, says the US Centers for Disease Control.

Despite having spent four years and $600,000, and using the world’s largest forensic database, the premier health agency reports it is unable to identify the source of the fibers emanating from those suffering with Morgellons. [1]

The CDC suggests that four out of a hundred thousand people — the rate of infection in Northern California — are imagining these filaments into existence.

Comprising an array of physical and mental symptoms [2], Morgellons is distinguished by novel fibers that protrude from the skin, causing lesions and sores that do not heal, or that heal very slowly.

“We conducted an investigation of this unexplained dermopathy to characterize the clinical and epidemiologic features and explore potential etiologies,” the paper explains. The only potential etiology suggested was that the patients were delusional:

No common underlying medical condition or infectious source was identified, similar to more commonly recognized conditions such as delusional infestation.

The CDC provided more information in its press releases [3] hyping the study than it did in the 300-word study published last week.  Its Unexplained Dermopathy webpage goes beyond what was reported in the actual study, saying there is “no evidence of an environmental link,” and promised to do no further studies. [4]“People who suffer from Morgellons disease are NOT delusional no matter what the CDC or the mainstream press would have you believe,” says Jan Smith of MorgellonsExposed.com.  She’s suffered with Morgellons for over 13 years.

The image above is on her home page. “Ponder why a person with Morgellons disease would have tissue coming out of their body with embossed letters on it.  This photo is real and the sample has not been altered in any way. It is available for research and DNA testing.” [5]

The CDC study reported, “Most materials collected from participants’ skin were composed of cellulose, likely of cotton origin.”

One of the specimens extruded from Smith’s body was found to be composed of cellulose and GNA, the synthetic form of DNA. [6]  Glycol nucleic acid does not occur naturally; it is used to create synthetic life forms. [7]

But why would the CDC not know exactly the origin of the cellulose, instead saying it’s likely from cotton?  And what about the rest that was not cellulose?  The study provided no details.

The CDC sent the cellulose and unnatural fibers to the Armed Forces Institute of Pathology, reports the Associated Press. [8]  AFIP has been collecting fiber samples and other forensic material for 150 years. [9]  Its 2011 budget was $65 million. [10]  Surely, if these novel fibers are natural or lab-created, the AFIP would know.  Apparently not.

AFIP is the same group that collected all the forensic evidence of the 9/11 attack on the Pentagon and at the Pennsylvania crash site, under code name Operation Noble Eagle. [11]The Center for the Investigation of Morgellons Disease, headed by Dr. Randy Wymore, was also unable to identify the fibers. The Oklahoma State University research center had the forensics team of the Tulsa Police Dept. compare samples to its database of 800 fibers and 90,000 organic compounds, without success, reports Natural News writer Barbara Minton. [12]

Though Wymore did not respond to my request for comment in reaction to the new CDC study, the Center’s home page still maintains that Morgellons “is frequently misdiagnosed as Delusional Parasitosis or an Obsessive Picking Disorder.” [2]

What is the CDC hiding about Morgellons?

What the CDC didn’t say in the public report is that those fibers are alive and motile.  They grow and reproduce, and have been shown to do so in a petri dish using certain visible light frequencies.  If delusions are creating them, that would be a first in human evolution.

Research conducted by Cliff Carnicom indicates that the still-unidentified fibers seen in Morgellons patients are the same as those collected after an aerial spray of chemtrails. [13]

After being cultured for five days, the fibers produced a sheen across the wine medium, right before explosively reproducing hundreds of new fibers in a 24-hour period. [14]  He later explored how these nanoworms feed on the iron in human blood, explaining that, “changes in iron and the utilization of iron in a pathogenic sense are at the heart of the Morgellons issue.” [15]

An arduous course of research led Carnicom to conclude that the nanoworms present in Morgellons patients represent an entirely new life form, and one that was engineered using features from each of the three Domains of life (Bacteria, Archaea and Eukarya). [16]

To bolster his argument, he refers to a Feb. 2010 disclosure by the Defense Advanced Research Projects Agency (DARPA) “to develop immortal ‘synthetic organisms’, as outlined in the unclassified version of the 2011 budget,” citing Wired.com:

As part of its budget for the next year, Darpa is investing $6 million into a project called BioDesign, with the goal of eliminating ‘the randomness of natural evolutionary advancement.’
“… The project comes as Darpa also plans to throw $20 million into a new synthetic biology program, and $7.5 million into ‘increasing by several decades the speed with which we sequence, analyze and functionally edit cellular genomes.’ [17]

If these unidentified fibers are some sort of top-secret nanotech military weapon, that would explain why no answer and no help will come from the CDC or the military.

Using Carnicom’s research, and others, documentarian Sofia Smallstorm (9/11 Mysteries) raised a singularly spectacular question at a speech last year:  Is it possible that Morgellons sufferers are those whose bodies are genetically rejecting these nano-engineered life forms, while our bodies are integrating them? [6]

That question must be noodling the brains over at the CDC and DARPA.  They must be wondering what is different about those 4 in 100,000 people whose bodies reject these synthetic life forms.  The report they didn’t reveal to the public is the one I want to read.

We do know that back in 2006, the National Institutes of Health listed Morgellons as a genetically caused disease, due to the presence of three copies of a chromosome rather than the normal two (known as trisomy). This was found at the 5S rRNA genes located on chromosome 1, in the q42.11 to q42.12 region, according to the following screen capture by Jan Smith, who explains that a year later NIH deleted the webpage [18]: 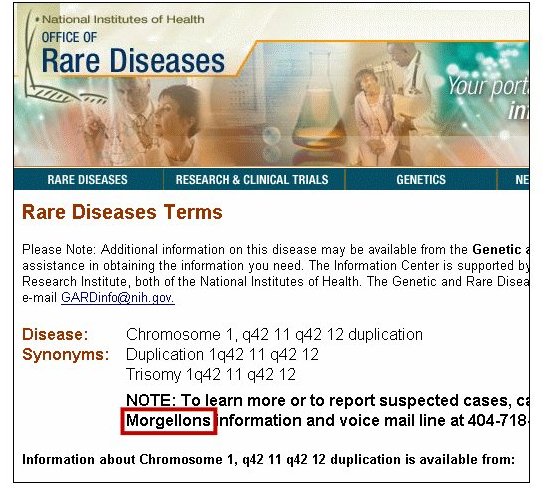 Trisomy can result in mental retardation and physical deformities. [19]  Are  these bioengineered life forms causing rRNA to produce a third copy of chromosome 1 at q42.11 to q42.12?  Or, do Morgellons sufferers already have a third copy, and its presence is somehow forcing the nanoworms to leave the body?

Several people agree with Carnicom that these living fibers are being sprayed on us via the vociferously denied chemtrail program.  Morgellons patient Kandy Griffin, president of Morgellons Research Group, puts it right out there:

Morgellons is not a disease. It is a process. It is a form of forced/directed evolution of the human genome. It is the fetal stage of transhumanism, and it is upon us.
This stealth project is being carried out with the use of the daily chemtrail operations, which are happening globally.  There is no escape.  The chemtrail operations are terraforming the earth and everything on it, including you. [20]

There is hope. In the last section of Carnicom’s Thesis, he suggests several mitigation strategies that would apply equally to those who develop Morgellons and those who don’t, but who are likely assimilating rather than rejecting these bioengineered life forms. [15]© Rady Ananda, 2012

Many videos and other sources at: Amir Alwani, “If Chemtrails And HAARP Didn’t Disturb You Enough, Wait Until You Hear About Morgellons,” 21 Nov. 2011.  https://potentnews.wordpress.com/2011/11/20/if-chemtrails-and-haarp-didnt-disturb-you-enough-wait-until-you-hear-about-morgellons/
Read more of Carnicom’s papers at http://www.carnicominstitute.org/papers_by_date.html

Rady Ananda is an investigative reporter and researcher in the areas of health, environment, politics, and civil liberties.  Her two websites, Food Freedom and COTO Report are essential reading.

RECENT REPORTS BY RADY ANANDA:
Confessions of a Lukewarmist
Thyroid cancer, fracking and nuclear power
PIPA vote stalled while US censorship still grows
Giuliani on WTC7 questions: Get a haircut, take a shower

This entry was posted on January 30, 2012 by Amir Alwani. It was filed under chemtrails, genetic modification, health, morgellons, news, science, studies, transhumanism, tyranny .