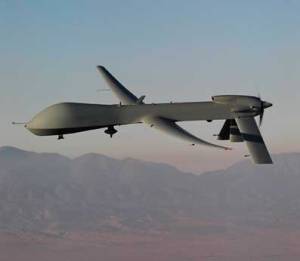 US military officials confirmed Saturday that US drones are flying over Syria, as fighting spreads inside the country and US officials discuss military or “humanitarian” intervention to topple Syrian President Bashar al Assad.

The drone flights, which flagrantly violate Syrian air space, include a “good number” of both military and US intelligence drones, according to US defense officials. These officials said the drones’ mission is to obtain “intercepts of Syrian government and military communications in an effort to ‘make the case for a widespread international response.’”

This echoes testimony Thursday before the US Senate Armed Services Committee by US Director of National Intelligence James Clapper. He said that recent bombings in Damascus and Aleppo “had all the earmarks of an al Qaeda-like attack. So we believe that al Qaeda in Iraq is extending its reach into Syria.”

As in last year’s war in Libya, Washington is seizing on violence between the Assad regime and US-backed opposition forces—which are organizing protests and killings inside Syria—to justify military intervention.

Significantly, the US relied extensively on former Al Qaeda fighters of the Libyan Islamic Fighting Group (LIFG) to topple Libyan Colonel Muammar Gaddafi, and it appears a similar relationship is being established in Syria.

Yesterday gunmen in the city of Idlib killed a senior state prosecutor, Idlib Attorney General Nidal Ghazal, as well as Judge Mohammed Ziyadeh and their driver in an ambush. On Saturday gunmen also killed Jamal al-Bish, a member of the city council of Aleppo—Syria’s largest city, which has seen no significant protests against Assad.

The killings follow a series of assassinations of Syrian officials, including the February 11 killing of Brigadier General Issa al-Khouli and last month’s shooting of the head of the Idlib branch of the Syrian Arab Red Crescent, Abdulrazak Jbero.

Even reports by the US-backed Syrian “opposition” and in the US media suggest that the Free Syrian Army and similar forces have little support outside of a few cities such as Deraa, Homs, and Hama. Aided and supplied by Turkey, European powers, and the United States, they are instead using terrorist actions to undermine the Assad regime and facilitate foreign military intervention.

US media report quite openly that Washington’s FSA proxies are preparing bombs for use against Syrian forces. According to a February 15 article, Timereporter Rania Abouzeid visited an FSA safe house in Syria, where she saw defectors from the Syrian army assembling Improvised Explosive Devices (IEDs) manufactured from yellow granular explosives. She noted that this “crop of IEDs isn’t the first to be aimed against loyalist forces in the area,” interviewing a Syrian army conscript who defected to the FSA out of fear after being hit by an FSA car bomb.

Saturday’s protest march in Mezze—a middle-class neighborhood of the capital, Damascus, which has remained largely loyal to Assad—gathered only “hundreds and hundreds” of people, according to the New York Times. The protest was called against the deaths of three protesters allegedly killed by security forces. The Syrian Observatory for Human Rights (SOHR), a British-based group that reportedly enjoys Saudi and Qatari funding, said Syrian security forces opened fire on the protest, killing one.

The SOHR added, “If the rallies have reached Damascus and are big enough, we will no longer need an armed revolution.” Such comments only underscore that the Syrian opposition is resorting to terrorist acts, which it cynically calls “revolution,” because it lacks popular support.

This only underscores that the task of fighting the Assad regime falls to the Syrian working class, which alone can overthrow it on a progressive basis, while fighting against the imperialist forces that are now trying to conquer Syria.

The cynical pose of concern struck by the Western governments and media was exemplified by British Foreign Secretary William Hague, who said he was “worried that Syria is going to slide into civil war.” At the same time as officials from NATO countries express concerns about civil war in Syria, they are actively fanning the flames of the conflict.

Two Republican US Senators, John McCain and Lindsey Graham, called for arming Syrian “rebels” yesterday in Kabul, where they had stopped for talks with the Afghan puppet regime of President Hamid Karzai on their way to discussions with the Egyptian military junta in Cairo.

McCain said, “I believe there are ways to get weapons to the opposition without direct United States involvement… So I am not only not opposed, but I am in favor of weapons being obtained by the opposition.” He suggested that Washington would not need to send weapons directly to the opposition, but could work through “Third World countries.”

Graham made clear that US moves against Syria are part of a broad regional confrontation by the United States against Iran: “Breaking Syria apart from Iran could be as important to containing a nuclear Iran as sanctions. If the Syrian regime is replaced with another form of government that doesn’t tie its future to the Iranians, the world is a better place.”

Graham said that the Cairo-based Arab League could be a “conduit” for US influence in Syria. It appears that Washington may again use its close relations with the Egyptian military junta in the services of counterrevolution in the Middle East.

The New York Times wrote that the Senators’ detailed remarks on arming pro-US Syrian forces “signal that these were themes that they would address when they arrived in Cairo, their next stop.” The United States gives $1.3 billion per year in subsidies to the Egyptian army junta. Over the past year, the junta used these resources both to support NATO-backed rebels in Libya and to suppress the revolutionary struggles of the Egyptian working class.

In a further sign of an escalating risk of wider war over the ongoing US-led intervention in Syria, an Iranian destroyer and an escorting supply ship docked yesterday at the Syrian port of Tartus after steaming through the Suez Canal.

This entry was posted on February 22, 2012 by Amir Alwani. It was filed under co-opting and/or destabilization, news, sovereignty, Syria, tyranny, war .