Neurologist Warns of Neurodegenerative Disease Due to Chemtrail Toxins 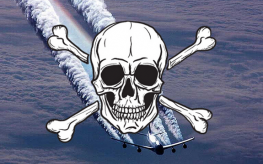 Chemtrails are real and they are dangerous, yet so many people still deny their existence. Well if a former Airforce veteran, chemicals and bio-environmental engineering whistle blower or other researchers aren’t convincing enough, then perhaps a neurologist will help people wake up to the fact that millions of tons of cancer-causing and brain-debilitating nano-particles are being dumped from the air by our government.

There are still people arguing about whether contrails are chemtrails, and the evidence is incredibly right before our eyes. Michigan is hazed out one week, California, the next, then back down south to hit Texas or Georgia. You can see the pictures others have captured if you don’t see them with your own ocular lenses.

Now, Russell L. Blaylock, M.D., called a hack and a self-promoting sycophant by his detractors, is warning us about what thousands of other average citizens have been for years. He says that the tons of nanosized aluminum compounds being sprayed on us via chemtrails are:

“. . .infinitely more reactive and induce intense inflammation in a number of tissues. Of special concern is the effect of these nanoparticles on the brain and spinal cord, as a growing list of neurodegenerative diseases, including Alzheimer’s dementia, Parkinson’s disease, and Lou Gehrig’s disease (ALS) are strongly related to exposure to environmental aluminum.”

The concerned neurosurgeon is only commenting on one known toxin, too. There are others, like barium and strontium, and a practically endless cocktail of carcinogenic constituents that can possibly cull the global population. Also speaking out against chemtrails is Dr. Edward Group, who explains how chemicals sprayed from chemtrails can “turn on” certain issues such as shingles within your body (under certain circumstances).

Aluminum exposure from chemtrails is helping to lead to aluminum-induced cognitive disorders among the population, as doctor Blaylock, suggests. Aluminum can even affect unborn babies, not just the elderly, since it crosses into the placenta via the blood.

Another toxin being found in chemtrails is Strontium-90. It isn’t any better. Neither is Barium.

The impact of these compounds upon human health is unmistakable. So why is this happening?

There are all kinds of theories, but gaining traction with the overt actions of Monsanto-monopolies, an utter disregard for nature by multiple corporate entities, the ever-present war-mongering that leaves us with tragedies like Fukushima, as well as a general disregard for human life run rampant, some are saying these chemtrails are to kill off most of the population. After all, we are waking up as a worldwide citizenry. But no matter the reason, 2 things are for sure: chemtrails are real, and chemtrails are dangerous.

If you want to learn about chemtrails, regardless of whether or not you agree with the current ‘conspiracy’ theories about why they are taking place everywhere, consider the following for your further edification:

This entry was posted on November 8, 2013 by Amir Alwani. It was filed under chemtrails, geo-engineering, news, science, tyranny .