November 26, 2013 (Tony Cartalucci) – Unprecedented protests have taken to the streets in Bangkok, now for weeks, where at times, hundreds of thousands of protesters have appeared. Estimates range from 100-400 thousand people at peak points, making them the largest protests in recent Thai history. 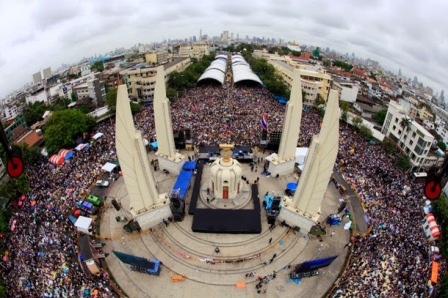 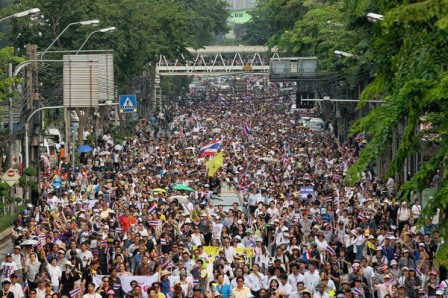 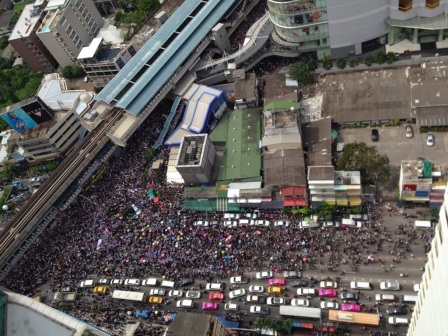 Images: Scenes taken from across Bangkok showing masses of people protesting the current government in Thailand. Unlike the government’s mobs of “red shirts” centrally directed by Thaksin Shinawatra himself, these rallies are led by a myriad of leaders and interest groups, from unions to political parties and media personalities. The numbers now present dwarf any effort by Thaksin and his political machine to fill the streets with supporters. Currently, the “red shirts” have failed to fill even a quarter of a nearby stadium, after two earlier abortive attempts to raise a counter-rally.

The protests aim at ousting the current government after it ignored a recent court ruling finding their attempts to rewrite the constitution illegal.

The current government of Thailand is being openly run by a convicted criminal, Thaksin Shinawatra, who is hiding abroad and running the country through his own sister, Yingluck Shinawatra and his vast political machine, the “Peua Thai Party” (PTP). PTP is augmented by street mobs donning bright red shirts, earning them the title, the “red shirts,” as well as a myriad of foreign-funded NGOs and propaganda fronts.

While it would seem like an open and shut case, regarding the illegitimacy of the current government, Western nations have urged protesters to observe the “rule of law” and have condemned protesters taking over government ministry buildings. Why is the West now seemingly defending the current Thai government, after nearly 3 years of backing protests around the world against other governments it claimed were overtly corrupt and despotic?

This entry was posted on November 26, 2013 by Amir Alwani. It was filed under China, co-opting and/or destabilization, news, protests, sovereignty, Thailand, tyranny, US, war .