With the “Shutdown Bangkok” campaign a success, protesters plan on consolidating stages and refocusing with their newly gained momentum.

The “Shutdown Bangkok” campaign was designed to coordinate pressure on the regime of US-backed dictator Thaksin Shinawatra and his proxy political machine headed by his own sister, Yingluck Shinawatra. Elections held on February 2, 2014 were successfully boycotted by over half the population in an unprecedented display of unified national defiance by the Thai people.

Since the elections, the regime has responded with an expanding campaign of armed terror that has left many dead, and many more horribly maimed, mainly from grenade attacks and gunfire launched by professional mercenaries, pro-regime thugs, and elements of the police loyal to the regime. Among the dead have been children. 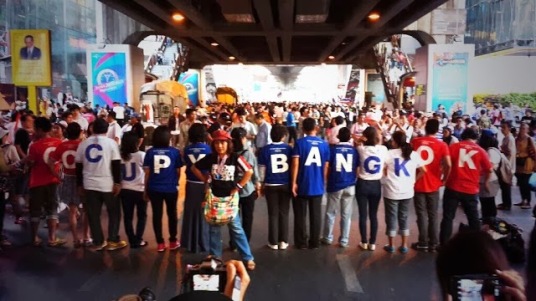 Image: Occupy Bangkok has exposed and hobbled the Wall Street-backed regime of Thaksin Shinawatra. With the February 2, 2014 sham-elections an abject failure, the campaign has been a success. The protest leaders are now consolidating stages into one single location from which they can concentrate their efforts to ease the Thaksin regime into permanent collapse.

Before the city-spanning “Shutdown Bangkok” campaign began, there was a single demonstration site including two stages at and near Bangkok’s Democracy Monument. It was announced yesterday evening that beginning on March 3, all of the stages that have been set up for “Shutdown Bangkok” will be consolidated once again, this time at Lumpini Park, near the Silom business district – accessible by Lumpini MRT station and Sala Daeng BTS station.

The move was long overdue – with the regime now fully exposed as both lacking any kind of democratic mandate, and resorting to violence as it clings with increasing desperation to power. The protesters at a single site can now continue organizing action against the regime, as well as direct resources toward the more impressive single-day mass protests (and the warm-up marches proceeding them) that have been the hallmarks of the months-long movement.

Security for a single site will also be easier to manage. In the wake of growing terrorism employed by the regime, and the regime’s Western backers feigning ignorance over who is behind the escalating violence despite overt admissions from the regime and its supporters weeks ago published in the US State Department-linked TIME Magazine.

According to the Bangkok Post, radical members of the Red Shirts — diehard champions of Yingluck and her notorious brother Thaksin Shinawatra — are readying a cache of arms in case the 46-year-old premier is forced from office by either military or judicial intervention.The paper quoted a Red Shirt source as saying “There are strong anti-coup and anti-court sentiments among the red-shirt mavericks who are familiar and experienced with weapon use.”

For protest leaders, the next step is to simply wait for the regime to continue unraveling. It has lost vast amounts of support, even among rural rice farmers who have turned against the regime in the wake of the disastrous rice subsidy program that have left thousands of farmers unpaid, destitute, and desperate, and the nation’s rice industry crumbling.

For the protesters themselves, organizing smaller direct action committees to develop and implement local solutions addressing a wide range of issues, from education to economics, and even helping the victims of the regime including the farmers – would be a good way to continue undermining the regime as well as move constructively toward a different paradigm beyond elections, corrupt politicians, and endless, futile political bickering.

The regime is expected to continue employing violence and terrorism against growing dissent. It, along with its Western backers, have continuously peddled the narrative of a coming “civil war.” As pointed out many times before, this is not even remotely possible. Instead, the regime will use widespread terrorism and propaganda to appear as such, to make increasing violence appear to be a “people’s movement” rather than state-sanctioned brutality.

Recently, the regime’s deputy secretary-general to the prime minister and “red-shirt” leader Suporn Attawong claimed he was assembling a 600,000-strong “pro-government Democracy Protection Volunteers Group,” as reported by the Bangkok Post’s article, “Red shirt hardliner seeks 600,000 men.” With the regime failing utterly to fill even a single stadium in Bangkok to counter massive and prolonged anti-regime protests, the prospect of assembling an able-bodied army of 600,000 men is slim to none.

The regime’s ludicrous posturing heralds increasingly desperate moves as it attempts to cling to power. However, the protests are growing, well led, determined, and highly motivated. Their patience and prudence has and will continue to work against the regime – with the regime’s attempts to strike back only expediting its fall.

Tony Cartalucci’s articles have appeared on many alternative media websites, including his own at Land Destroyer Report, Alternative Thai News Network and LocalOrg.

This entry was posted on March 1, 2014 by Amir Alwani. It was filed under news, police state, protests, sovereignty, Thailand, tyranny, US .