via The Anti Media 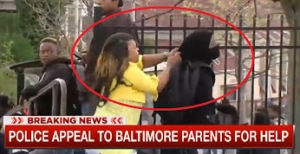 (ANTIMEDIA) While Freddie Gray was laid to rest yesterday, corporate media outlets amplified the Baltimore Police Department and the mayor’s calls for “peaceful protest.” However, tensions heightened when the City of Baltimore decided to use militarized violence against high schoolers that were calling for justice for Freddie Gray. MSNBC mimicked those calls for peaceful protest yesterday, but this morning on MSNBC’s show “Morning Joe” two MSNBC hosts advocated for a certain kind of violence: child abuse.

In a video shared by “Morning Joe,” a mother strangles her son with his mask and then slaps and hits him repeatedly in the face. As she abuses her child on national television, MSNBC host and former Congressman, Joe Scarborough (R-Fla.) commentates: “Baltimore police officers asking parents to actually step in and try to do something to help out yesterday to bring the city under control during the riots… and one mother listened. She was captured on video discipling her son. Now, how many parents can relate to that?… Doing what any good, strong mother would do. God bless her for doing that.”

[…CONTINUE READING THIS ARTICLE and watch the video]

This entry was posted on April 29, 2015 by Amir Alwani. It was filed under child abuse, consciousness, news, tyranny, US, videos and was tagged with Freddie Gray.