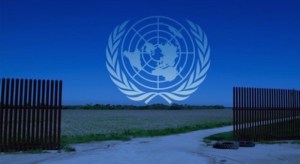 This mass migration plan has been in the works for a long time, but they’re kicking it up several serious notches now, flooding the US borders while continuing to swarm European countries with any immigrants they can from a variety of cultures.

What and who is behind it?

Clearly staged US/NATO/Israeli sponsored terrorism and genocide are at work in the middle east, driving desperate people to seek asylum elsewhere, as the US mandates inviting in as many as possible over its southern border. And all in concert.

As usual, they give themselves away in their own documents and bloated speeches to their own inner circle. In particular, United Nations globalist fat cat Peter Sutherland, non-executive Chairman of Goldman Sachs and former BP CEO, never mind top Bilderberger and Trilateral Commission honcho, has come right out and stated their plan as plainly and arrogantly as possible.

This entry was posted on September 17, 2015 by Amir Alwani. It was filed under co-opting and/or destabilization, EU, Israel, tyranny, UN, US, war, world government and was tagged with multiculturalism/race-war.