How TV Affects Your Brain Chemistry for the Worst [Part 2] 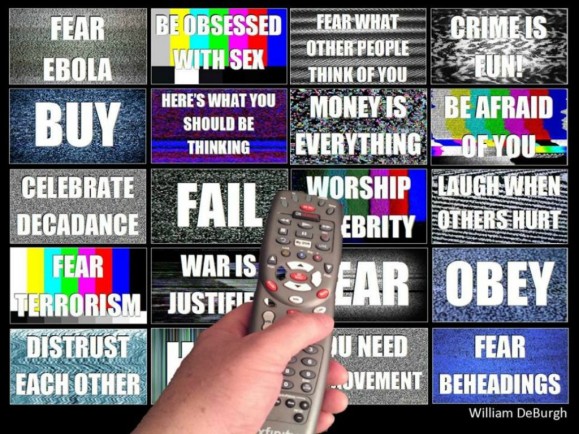 A while back I wrote “How TV Affects Your Brain Chemistry for the Worst,” and someone asked, “Don’t you mean for the worse?” No… the worst. I don’t mind getting called a Luddite or skittish about technology because I know TV’s effects in my own life, large parts of which that were evaporated by a flickering, vampiric screen. Such a blind trust in this “gift” to humanity really should have been questioned and cautioned early on. The writer Jerry Mander even predicted the “death culture” of television in the 1970s when he analyzed programming for his book Four Arguments for the Elimination of Television. He knew the magical, forceful will of manipulative imagery from the other side since he used those tricks as a top PR executive.

Last time, I touched on stress hormones. Volumes have been researched and written about hormones – the damaging effects of chronic streaming hormone release; but very rarely does anyone think to analyze that watching television might make up a good bulk of that stress. So it would appear that chronic stress happens throughout the day while trying to work or survive, and then continues with entertainment – more like en-train-ment. Maybe television should be considered in a dietary sense – something that is ingested and can be overdone.

Cortisol is necessary for good health but the amounts released in the Western world are brinking on PTSD levels and can lead to impaired brain function, damaged thyroid, obesity, blood sugar problems, chronic fatigue, immune dysfunction, impaired healing, insomnia and weakness. (source) Trauma can lead to brain fog and shrinking of the hippocampus – the brain center responsible for creating new, time-sequenced memories. Adrenal fatigue is the disorder du jour – could television play a role?

The body must not agree with the brain that the imagery is fake, because fight-or-flight is triggered just the same. Another aspect that people rarely mention is that storylines will trigger fight-or-flight adrenaline reaction based on events that happened in your own life.

This entry was posted on September 17, 2015 by Amir Alwani. It was filed under consciousness, health, mind-control, news, tyranny, videos .