America Was Founded by the Illuminati 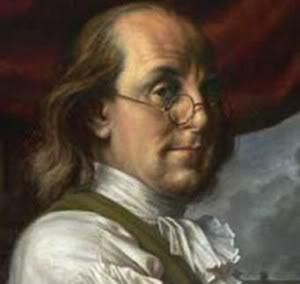 One of the most influential figures in the American Revolution was the writer, philosopher and scientist Benjamin Franklin. In February 1731, he became a Rosicrucian Mason and in 1734 Provincial Grand Master of Pennsylvania. While in France in the 1770’s, as a diplomat for the American colonies, Franklin was made Grand Master of the politically-oriented Masonic lodge called Neuf Soeurs in Paris.

We speak about the occult “conspiracy” as if it were going to erode the status quo.

In fact, as David Livingstone explains,  the occult conspiracy is a fait accompli. Modern Western “civilization” is built on the denial of spiritual Reality, i.e. man’s connection to God through our soul. The United States was created by occultists to impose this Godless, i.e. Satanic, dispensation on the world. Society truly is a satanic cult.

Like the French Revolution, the American Revolution created a new secular state, removing the authority of Christianity, and replacing it with ideals secretly promulgated by the secret societies.

These ideals were then enshrined in the American Declaration of Independence, the United States Bill of Rights and the French Declaration of the Rights of Man and of the Citizen. As a cryptic clue to their true origin, the Declaration of Human Rights adopted in France after the Revolution features several prominent occult symbols.

First, is the Illuminati symbol of the All Seeing Eye within a triangle, now found on the Great Seal of the United States. Underneath the title is an Ouroboros, an ancient Gnostic symbol of Satan, found in Western alchemy. Underneath it is a red Phrygian cap, derived from the pagan Mysteries of Mithras. The entire Declaration is guarded by the twin Masonic pillars. As the Bonnet, the orator at the Grand Orient Assembly boasted in 1904:

When the Bastille fell, Freemasonry had the supreme honour of giving to humanity the chart which it had lovingly elaborated. It was our Brother, de la Fayette, who first presented the ‘project of a declaration of the natural rights of the man and the citizen living in society,’ to be the first chapter of the Constitution.

On August 25, 1789, the Constituent Assembly, of which more than 300 members were Masons, definitely adopted, almost word for word, in the form determined upon in the Lodges, the text of the immortal Declaration of the Rights of Man.

This entry was posted on November 24, 2015 by Amir Alwani. It was filed under esoteric, true culprits, tyranny, US and was tagged with symbolism.