Is the Oregon Occupation Being Stage-Managed? 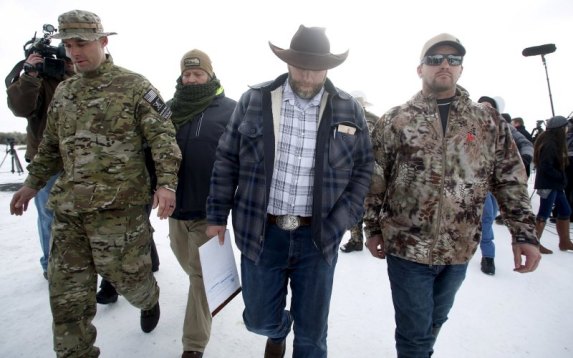 US and international media have been abuzz in recent days with the ongoing armed occupation at the headquarters of the Malheur National Wildlife Refuge in Oregon.  The social media space has been, quite predictably, polarized with many on the far right lionizing the armed occupiers as “patriots” and “heroes” defending a just cause in the name of “liberty.”  Naturally many liberals and assorted leftists have condemned the occupation, pointing out both the relevant legal and historical issues at play here, including the vicious tradition of white militias in the US, the blatant disregard of environmental regulations, and much more that is well beyond the scope of this article.

But what has been missed by seemingly every pundit, left and right, who has chimed in on the Oregon occupation is the unmistakable stench of provocation.  Simply put, something is off about this whole story, and it struck me from the first moment I read about what was happening, who was involved, and who wasn’t involved.  Specifically, there are indications that this entire fiasco has been manufactured by either government agencies themselves or some other private forces for any number of reasons.

If this sounds like “conspiracy theory” to you, it should; I am here theorizing about a potential conspiracy [studio audience gasps].  While the media, academia, and other assorted handmaidens of the ruling class have conditioned many on the Left to recoil in horror at the mere mention of the word, the fact remains that conspiracies are everywhere, that the government and corporations are involved in them, and that refusing to question received narratives and facts for fear of being tarred and feathered as a “conspiracy nut” is precisely the sort of mindless twaddle that has become all too pervasive on the Left.

And so, armed with my bullshit detector, and with full knowledge that many potential angry emailers have already stopped reading, I now dive into the morass that is the #OregonOccupation.

This entry was posted on January 26, 2016 by Amir Alwani. It was filed under co-opting and/or destabilization, news, tyranny, US and was tagged with Oregon Standoff.