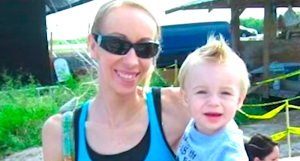 eather Hironimus, a 31-year-old mother from Boyton Beach, sits in jail for fleeing with her 4-year-old son from a surgical circumcision mandate, requested by the boy’s father, and imposed by the Florida court of law.

Police apprehended Hironimus last week after the mother and son had spent three months in hiding, defying a court order to subject the child to the surgical procedure of circumcision.

As part of their separation deal three years ago, Dennis Nebus — father to the child in question — consented to have the boy circumcised, a deal Hironimus later backed out of. Nebus then took Hironimus to court, and the pair have been battling it out for approximately two years.

This entry was posted on May 22, 2015 by Amir Alwani. It was filed under child abuse, circumcision, news, police state, tyranny, US .