Lawsuit: Guards At Rikers Allowed to Rape Inmates with Consent from City Officials 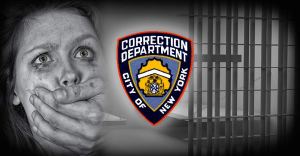 New York, New York – According to a lawsuit filed this week, the city of New York has helped enable the ongoing abuse and rape of several female inmates at the all-female Rose M. Singer Center at Rikers prison. Two women behind the lawsuit, who wish to remain anonymous, say they were both raped on multiple occasions by the same corrections officer, Benny Santiago.

The lawsuit also says that eight other corrections officers were involved in raping women at the prison on a regular basis, and in one case one of the inmates even got pregnant.

The plaintiffs, represented by the Legal Aid Society, seek damages from Santiago as well as an overhaul of Department of Corrections policy in order to break what they call a “culture of systemic rape.”

Santiago abused the two women in unrestricted areas that were not monitored by security cameras and would wait until after center captains had made their supervisory rounds, which were made at the same time every day, the complaint says.

After reporting the assaults to the staff at the prison, one of the plaintiffs were told that nothing could be done about the attacks.