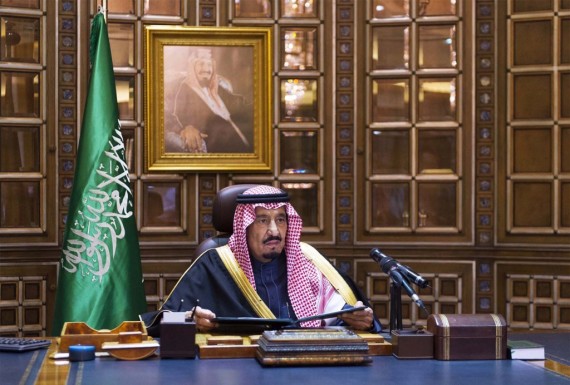 Saudi Arabia has long been one of the most influential nation states in the Middle East, and is probably our government’s closest ally in the region (perhaps even more so than Israel). They’re also one of the biggest oil producers in the world, and our relationship with their government was responsible for spawning the petrodollar. This is widely regarded as the linchpin of the global economy, and has been since the gold standard was completely removed by Richard Nixon. It would suffice it to say that what happens in Saudi Arabia, can easily affect every nation on Earth.

That’s why the latest events surrounding Saudi Arabia have been so alarming. Among them, is an open and anonymous letter which was recently written by a Saud family prince. In it, he called for a coup to overthrow King Salman, who has only been on the throne since January.

Eight of the 12 surviving sons of Saudi Arabia’s founding monarch are supporting a move to oust King Salman, 79, the country’s ailing ruler, and replace him with his 73-year-old brother, according to a dissident prince.

The prince also claims that a clear majority of the country’s powerful Islamic clerics, known as the Ulama, would back a palace coup to oust the current King and install Prince Ahmed bin Abdulaziz, a former Interior Minister, in his place. “The Ulama and religious people prefer Prince Ahmed – not all of them, but 75 per cent,” said the prince, himself a grandson of King Ibn Saud, who founded the ruling dynasty in 1932.

Support from the clerics would be vital for any change of monarch, since in the Saudi system only they have the power to confer religious and therefore political legitimacy on the leadership.

The Saudi royal family is quickly losing faith in King Salman, largely because he is rumored to be battling Alzheimer’s. On top of that, they are not too pleased with his ongoing and costly war in Yemen. And that leads me to the second major development to come out of Saudi Arabia.

Their government is on the road to financial ruin. According to the IMF, they may run out of money within the next 5 years if they stay on their current course. The wars they are fighting, coupled with lavish public works projects, have driven their expenses to record levels. Meanwhile, the slump in oil prices (which they contributed to so they could bankrupt their competition) has left them with their lowest revenue levels in decades.

This entry was posted on October 26, 2015 by Amir Alwani. It was filed under economy, news, Saudi Arabia, tyranny, war .