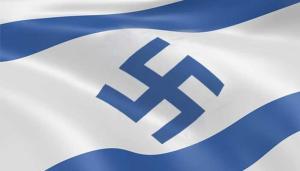 Alex Jones has recently filmed a debate between himself and former Grand Wizard of the KKK David Duke, and while Jones claims to use the logic of the “globalists” against themselves, he inadvertently reveals his own ties with the Patriot and white supremacist movements, which have been a key component in the Zionist manipulation of conspiracy culture in the US.

Theodor Herzl, the founder of Zionism, employing the ultimate chutzpah, pronounced a plan to exploit the stereotype of the wealthy Jew in order to create anti-Semitism to generate support for the cause of Zionism. According to Herzl, “The anti-Semites shall be our best friends.”[1]

Throughout the century, maintaining the impression of an enduring threat of “anti-Semitism” has been essential to the Zionists’ quest of recruiting the backing of the nations of the world in support for the genocidal and racist state of Israel. Ultimately, the Zionists have been cultivating a culture of anti-Semitism around the world, and especially in American conspiracy culture.

[RELATED VIDEO: Israeli Minster “We Always Use The Anti-Semitism Trick or Use The Holocaust Card”]

As demonstrated by Yoav Shamir, in True Stories: Defamation, a 2010 documentary aired by Channel 4, the Anti-Defamation League, originally founded by the Masonic and Sabbatean B’nai B’rith, tends to exaggerate or even fabricate the threat of anti-Semitism.[2] In 2005, Norman G. Finkelstein explained in Beyond Chutzpah: On the Misuse of Anti-Semitism and the Abuse of History, that the specter of a “new anti-Semitism” has been invented by supporters of Israel to brand any serious criticisms of Israel’s human rights abuses as anti-Semitism.

To Yoav Shamir, Abe Foxman, who had been the ADL’s head since 1987, explained his power and influence as exploiting the “fine line” of anti-Semitism. Jews, he explains, “are not as powerful as Jews think we are, nor as powerful as our enemies think we are. Somewheres [sic] in between. They do believe we can make a difference in Washington, and we are not going to convince them otherwise.” Foxman asks, “How do you fight this conspiratorial view of Jews without using it?” Yoav Shamir interprets Foxman’s explanation to mean, “It’s like a poker game, in which Foxman bluffs the other side into thinking the Jews have more influence and power in Washington than they really have. The downside is, that the idea of Jews being so powerful can result in envy, even hate.”[3]

Following upon Leo Strauss’ prescription of using Plato’s concept of “noble lies,” the Zionist neoconservatives seized on a plot to gain grassroots support in the US by aligning themselves with the Christian Right. By denouncing purported threats of “communism,” the movement serves the CIA and the Zionists’ real aim of pushing neoliberalism, the synarchist and fascist ideology of the Mont Pelerin Society, marketed to unsuspecting Americans as “Libertarianism.”

Funding for these policies, that defined the economics of Margaret Thatcher and Ronald Reagan, known as “Reaganomics,” derived primarily from Rockefeller-dominated ExxonMobil, which then funded other foundations or known CIA fronts, who in turn fund the many conservative organizations and think tanks.[4] These incluce the Lynde and Harry Bradley Foundation, Sarah Scaife Foundation and John M. Olin Foundation, who are also responsible for funding the Zionist American Enterprise Institute (AEI) and the right-wing and the Heritage Foundation.

The Heritage Foundation represents one of the many tentacles of the gigantic Tavistock octopus, which has extended from the University of Sussex to the US through the Stanford Research Institute (SRI), Esalen Institute, MIT, Hudson Institute, Brookings Institution, Aspen Institute, the Center of Strategic and International Studies at Georgetown, US Air Force Intelligence, and the RAND Corporation.[5]

The Tavistock Clinic was originally formed in 1920 by the Royal Institute for International Affairs, the sister organization of the Rockefeller-founded Council on Foreign Relations (CFR), both of which were products of the original Round Table created at the bidding of Cecil Rhodes. The Tavistock Clinic, which became the Psychiatric Division of the British Army during World War II, and contributed to the CIA’s MK-Ultra program, took its name from its benefactor Herbrand Russell, Marquees of Tavistock, 11th Duke of Bedford, a title inherited by the influential Russell family, one of the most prominent aristocratic families in Britain who came to power and the peerage with the rise of the Tudor dynasty.

The work of right-wing loud-mouth conspiracy celebrity Alex Jones, including a number of documentaries, like Endgame: Blueprint for Global Enslavement and New World Order, and his book The Answer to 1984 Is 1776, were distributed and or published by Satanist and Crowleyite Richard Metzger’s Disinformation Company, a company that connects technopagans and transhumanists. Metzger was the host of the TV show Disinformation, the Disinformation Company and its website Disinfo.com, featuring the tagline “everything you know is wrong,” that focuses on current affairs titles and seeks to expose alleged conspiracy theories, occultism, politics, news oddities and purported disinformation.

Metzger admits that from an early age he identified himself as a “warlock,” and that, “through a careful study of [Kenneth] Anger’s work and through this influence, in part, I continued to move towards combining my career ambitions of working in film, television and publishing with my private magical interests.”[1] Anger, the notorious producer of Crowley-inspired underground films, was the key figure around which swirled the network of Laurel Canyon musicians, occultists, and members the Mason Family and the Church of Satan. Ultimately, Meztger considers the Disinformation Company to be a “magick business,” and explains:

Magick—defined by Aleister Crowley as the art and science of causing change in conformity with will—has always been the vital core of all of the projects we undertake at The Disinformation Company. Whether via our website, publishing activities or our TV series, the idea of being able to influence reality in some beneficial way is what drives our activities. I’ve always considered The Disinformation Company Ltd. and our various activities to constitute a very complex spell.[2]

In addition to Alex Jones, the Disinformation Company has also been responsible for a number of apparently establishment-critical or conspiracy-inclined documentaries, such Outfoxed: Rupert Murdoch’s War on Journalism (2004), Uncovered: The Whole Truth About the Iraq War (2004), Bush Family Fortunes: The Best Democracy Money Can Buy (directed by Greg Palast), Wal-Mart: The High Cost of Low Price (2005), Iraq for Sale: The War Profiteers (2006), Slacker Uprising (a movie of Michael Moore’s tour of colleges in swing states during the 2004 election, as well as 9/11: Press for Truth (2006), 9/11 Mysteries (2006).

Disinformation, also known as Disinfo Nation, was a television show hosted by Metzger, which aired for two seasons on Channel 4’s late night “4Later” programming block in the UK. The sixteen 30-minute episodes produced for C4 were then cut down to four one-hour “specials,” intended for the Sci Fi Channel in America, but never aired due to their controversial content. Those four shows have subsequently been released on a DVD, with a second bonus disc presenting highlights of DisinfoCon, a twelve-hour event held in 2000, featuring Metzger, and a host of occult celebrities, including Marilyn Manson, Kenneth Anger, painter Joe Coleman, Douglas Rushkoff, Mark Pesce, Grant Morrison, Robert Anton Wilson, Todd Brendan Fahey and others.

The bizarre irony is that, Disinformation seems to produce just that: disinformation. A telling example is Metzger’s interview on Disinfo Nation of Ted Gunderson, a former FBI agent who is known for his investigations of a secret and widespread network of groups in the US who kidnap children and subject them to Satanic ritual abuse and human sacrifice. However, Metzger’s “documentary” is obviously a mockery, in the Discordian style of “humor,” and the playing of both sides typical of Robert Anton Wilson. Gunderson’s focus has been on abuse within the CIA and military establishment, and he mentions that southern California is a pivotal area of Satanic cult activity. However, although Meztger’s documentary claims to be a “deep and undercover look” at the “shadowy figures” in Satanism today, he juxtaposes Gunderson’s comments by reporting on a pitiful group of bumpkin Satanist wannabes.

[interviews with the author: