Historian David Livingstone, author of Transhumanism – History of a Dangerous Idea and Black Terror, White Soldiers joins me to discuss his forthcoming book Ordo Ab Chao and his research into the connections between the Fascist International, Freemasons, Zionism, the KKK, Discordianism, Alex Jones, Trump, Russia, and more.

[Vimeo version of this video – downloadable for offline viewing]

END_OF_DOCUMENT_TOKEN_TO_BE_REPLACED 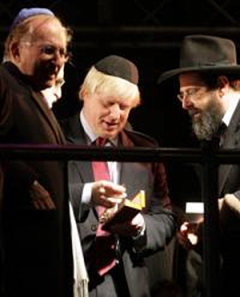 Brexit champion Boris Johnson, the self-proclaimed ‘passionate Zionist’, with the elders of Zion.

There is great rejoicing in much of the so called alternative media over the “Brexit” result in yesterday’s British referendum on membership of the European Union. If more proof were needed that the alternative media is often misinformed and credulous, this is it.

Alternative types, from David Duke to David Icke, have of course been insisting for months that the Brexit movement represents a mighty blow against Zio-globalism. There may be some excuse for Duke to believe this guff: he is, after all, an American and presumably relies on British “white nationalists” for information about such matters. There is little or no excuse for British white nationalists themselves, or for British critics of Zionism like Icke, to be so deceived.

Gay neocon Milo Yiannopoulos is part of the Zionist Trojan Horse wing of the “Alt-Right” which also includes such luminaries as Paul Joseph Watson, Steven Crowder, Dave Rubin, Ezra Levant, and everyone who works for Breitbart. These charlatans are Jewish supremacists and Zionist Power-deniers who are steering the Alt-Right through entryist ruses. We are starting to see a fusion between these shills and the New Atheists, another Jewish-led gang of covert Likudniks who make millions spitting out rancid disinformation to cover up the Zionist conspiracy.

Christopher Jon Bjerknes is a writer and researcher who has published numerous books and articles on the history of the theory of relativity, Einstein, Zionism and the Armenian Genocide. “Albert Einstein: The Incorrigible Plagiarist” and “Mileva Einstein-Marity: Einstein’s Partner in Crime” are among Bjerknes’ most controversial works.

In the first half, Christopher describes the evidence pointing to Albert Einstein’s plagiarism of Hendrik Lorentz and countless other physicists in his development of the theory of relativity. He talks about Einstein the Zionist and the “Einstein Terror” – a Semitic method of suppression that was used to literally terrorize and imprison anyone who dared question the dogma of Einstein. We get into Einstein’s soured reputation in Germany and the big hype surrounding his arrival in New York City, where he relocated in order to specifically promote Zionism. Christopher illustrates how Einstein manipulated credit for the E=mc² formula and failed to understand the basic concept of space time. We touch on the gravitational wave theory being hyped in the scientific press today and the costly reinforcement of flawed experimentation that is deliberately leading Western science away from technologies being advanced in Israel. Then, Christopher gets into the role that Mileva Einstein-Marity played in turning Einstein’s theoretical ideas into formal mathematical theories. We also put focus on the development of the pop culture icon of Einstein and the impact this cultish persuasion has had on the foundations of Western civilization.

In the members’ half, Christopher details Einstein’s instrumental role in the Zionist agenda and the fact that he was treasonous to his own people and despised Europeans. We look at the Freemason Coudenhove-Kalergi’s founding ideology of the European Union and the banking moguls who funded an explicit plan to weaken the European people, lift up the so-called masterful and morally superior Jewish people, and fulfill the ancient messianic prophecy of world rule as declared in the Talmud and Kabballah. Christopher points to other pseudo-Christian kabbalists like Isaac Newton who were instrumental in promoting the Christian Zionist movement. He explains the implications of the concept of “as above, so below” in relation to the psychological, technical and religious warfare that has been unleashed by Jews to propagate political movements designed to quickly bring forth prophetic conditions. Further, Bjerknes emphasizes how the current rise of Islam in Europe is part of an ancient plan to annihilate Christians via the Muslim hand. We consider how Whites have been programmed with the belief of their original sin, and how Islamic teachings justify and encourage the mass raping and slaughter of “white devils.” Later, we look at the infiltration of Zionist interests within the US White House, and the modern liberal tactic of subverting the Western world from within. At the end, Christopher talks about the Anno Lucis dating system and highlights what the New Testament says about the 2500-year-old conspiracy to genocide all gentiles.

END_OF_DOCUMENT_TOKEN_TO_BE_REPLACED

The mind-reading specialists at the Ugly Truth proclaim Trump a warrior against Zionism and ‘Jewish interests’. Apparently they’re transitioning out of geopolitical analysis and into comedy.

Brandon Martinez is an independent writer and journalist from Canada who specializes in foreign policy issues, international affairs and 20th and 21st century history. For years he has written on Zionism, Israel-Palestine, American and Canadian foreign policy, war, terrorism and deception in media and politics. He is the author of “Grand Deceptions, Hidden History and The ISIS Conspiracy.”

In the first hour, Brandon outlines some of the new content that will be included in the forthcoming second edition of “Grand Deceptions.” The book covers the Zionist origins of the “War on Terror” beginning with 9/11 and the strategies that have been used in Syria, Libya, Iraq and Afghanistan throughout the entire Neocon conspiracy to create a clash of civilizations in the Middle East. Brandon details how the migrant crisis in Europe is part of a Zionist plot to weaken the West and break down the countries surrounding Israel in their quest for expansion. We look at the Jewish elite’s tactic of creating a divide in the consensus over the multicultural experiment, along with promoting activism aimed at exacerbating divisions through identity politics. Brandon goes into the history of Cultural Marxism and the Zionist Frankfurt School agenda to break down Western society. He also explains how Muslims are being used as willing pawns in the psychological war against Whites that is designed to produce a disillusionment of ethnic homogeneity so as to further the long-term Coudenhove-Kalergi goal of creating a “Eurasian-Negroid” mongrel globalist slave race. Then, we discuss how legitimate Nationalist movements concerned with the Islamic diaspora are being hijacked by Zionist Neocon agents like Pegida UK who are openly supporting Israel, creating a schizophrenic reaction to the issue of forced multiculturalism.

In the members’ hour, we address the problems we face in bringing awareness to the general populace of the Zionist scheme against Whites while promoting self-determination for all peoples on Earth. Brandon says that we must take a moralistic approach to opposing the agenda to destroy Europe and avoid emanating the holier-than-thou attitudes of the evil elites we oppose. We get into the issue of Jewish supremacy and the fact that Islamization of the West is looked at as punishment for the Christian persecution of Jews 100s of years ago, and the holocaust can be invoked at any time to silence any “anti-Semitism” coming from “gentiles.” We also discuss the myth of the 6 million that has been part of an ages-old religious narrative of a Jewish messiah’s return to Earth. Further, we emphasize how the cultural disruption in Europe resulting from mass immigration serves as a smoke screen for more purging of Syrians and other Middle Easterners in Israel’s psychopathic push to expand territory and control more oil and water resources. Later, our focus turns to the tremendous task it is to power forth and continue the quest of exposing the root cause of our world’s decaying condition.

END_OF_DOCUMENT_TOKEN_TO_BE_REPLACED

VIDEO — Zio-Panderer Trump to AIPAC: ‘My number one priority to dismantle disastrous deal with Iran’

Republican frontrunner Donald Trump gave a noxious pro-Israel speech to AIPAC, stating that his “number one priority” is to dismantle last year’s US-Iran nuclear accord. He also pledged to move the American embassy in Israel from Tel Aviv to Jerusalem, and to eschew any UN resolutions against Israel. Time Magazine printed whole nasty, gross speech:

Good evening. I speak to you today as a lifelong supporter and true friend of Israel. I am a newcomer to politics but not to backing the Jewish state.

In late 2001, weeks after the attacks on New York City and Washington – attacks perpetrated by Islamic fundamentalists, Mayor Giuliani visited Israel to show solidarity with terror victims. I sent him in my plane because I backed the mission 100%.

In Spring 2004, at the height of violence in the Gaza Strip, I was the Grand Marshal of the 40th Salute to Israel Parade, the largest single gathering in support of the Jewish state.

It was a very dangerous time for Israel and frankly for anyone supporting Israel – many people turned down this honor –I did not, I took the risk.

[CONTINUE READING THE SPEECH and/or WATCH THE VIDEO]

Palmgren: “David Livingstone, born in Montreal Canada, began studying towards a Bachelors degree in Western Civilization, at the Liberal Arts College, of Concordia University in Montreal. This college was an experimental program that, instead of studying courses randomly in a given subject, over a period of three years, would coordinate three courses simultaneously, in history, literature and art, beginning with Homer and the Bible, following all the major movements of Western Civilization, culminating in the twentieth century. It was while reading the textbooks provided to him there that he first encountered the curious reference to the emergence in ancient times of the “Indo-European” people, the supposed ancestors of modern-day Europeans, from the mountains of the Caucasus. It was as he began to search out the evidence behind the theory, which he discovered to be founded in an occult doctrine, that revealed the existence of a hidden tradition in the West. David is the author of of “Terrorism and the Illuminati – A Three Thousand year History” and “The Dying God – The Hidden History of Western Civilization”. For the first hour of this program, we discuss history as propaganda. David says propaganda is usually employed to garner citizens’ support for current political objectives. But, these need to be placed in the proper context, in order to make them appear justified within the greater scheme of things. This fact has long been recognized, since the eighteenth century, there has been a concerted effort to consolidate the media, in order to ensure a perception of reality, that was commensurate with the objectives of the powers that be. Part of this agenda has been the re-writing of history, to nurture patriotic devotion to the collective consisting of the nations of Europe and America as “Western Civilization”, to be pitted in opposition with some specific “other”. In our case, the “East”. In our members section, we discuss the Illuminati and royal bloodlines.”

The motion passed Monday in a 229-51 vote. Introduced last week by members of the opposition Conservative Party, the motion won support from the ruling Liberal Party as well.

It calls on the Canadian government to “condemn any and all attempts by Canadian organizations, groups or individuals to promote the BDS movement, both here at home and abroad.”