My critique of George Galloway who is shilling for Putin on the Litvinenko assassination. “We need to work with Putin and Russia on international issues so let’s deny he ordered this hit,” is essentially Galloway’s argument.

The world media reacted to this hint on the open use of psychotronic weapons by the publication of scientific experiments from the 1960‘s where electromagnetic waves were used to transmit simple sounds into the human brain. However, most of them avoided saying that since then extensive scientific research has been carried out in this area throughout the world. Only a Colombian newspaper, El Spectador, published an article covering the whole scale of the achievements of this (computerized English translation).

Britain’s Daily Mail, as another exception, wrote that research in electromagnetic weapons has been secretly carried out in the USA and Russia since the 1950’s and that “previous research has shown that low-frequency waves or beams can affect brain cells, alter psychological states and make it possible to transmit suggestions and commands directly into someone’s thought processes. High doses of microwaves can damage the functioning of internal organs, control behaviour or even drive victims to suicide.”

In 1975, a neuropsychologist Don R. Justesen, the director of  Laboratories of Experimental Neuropsychology at Veterans Administration Hospital in Kansas City, unwittingly leaked National Security Information. He published an article in “American Psychologist” on the influence of microwaves on living creatures’ behavior.

In the article he quoted the results of an experiment described to him by his colleague, Joseph C. Sharp, who was working on Pandora, a secret project of the American Navy.

END_OF_DOCUMENT_TOKEN_TO_BE_REPLACED

Were Turkey’s actions against Russia a provocation, or a response? Analysis indicates a bit of both, but tending towards response. Turkey struggles to maintain its interest in the Syrian conflict, importing oil from ISIS controlled areas. Russia recently dealt a serious blow to ISIS, striking a convoy of oil trucks headed to Turkey. From this perspective, Turkey has retaliated against Russia. What will Russia’s response be?

Rather, Russia must not be controlled by its responses, but must forge its own activity.
Bilal Erdogan is a financier and owner of the oil trucks used by ISIS. The Russian strikes against the Ergodan family business have both personal and geopolitical ramifications for Turkey. This leads us to conclude that the downing of the Russian jet was not merely the order of a local airforce captain making a bad call – but rather the planned and thought-out action of the entire Turkish establishment.

END_OF_DOCUMENT_TOKEN_TO_BE_REPLACED

Alternative media needs to stop the Putin worship now, before this leads to more bad strategic and political choices.

The love relationship with the Russian empire has successfully replaced 9/11 truth as the core belief system of the alternative media. Something I would have never expected a few years ago from a movement that was built on the work of Antony Sutton and other similiar experts.

And when I say Putin worship, there is obviously a variety of pro Putin opinions. You have the total believers of the personality cult and of the lies which the Russian intelligence agencies constantly pump out about foreign and domestic policy.

All of these different pro Putin opinions are flat out wrong. Get out of this dialectic game of team Putin vs. team Obama before it’s too late.

MUST READ — Mixed Signals from Moscow: Putin’s Russia, Israel and the Middle East 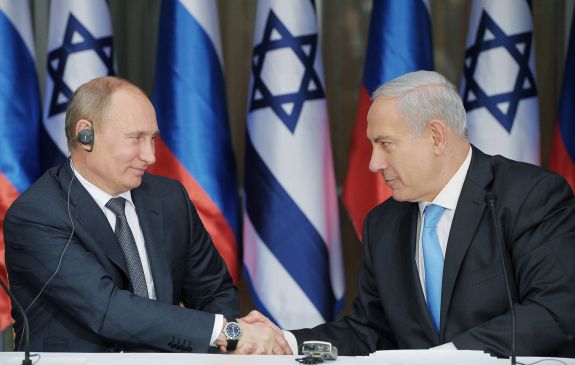 We have been hearing loud assertions of Russian benevolence towards the Arab world for some time, usually emanating from certain dogmatic quarters of anti-Zionist, anti-imperialist circles on the web.

These analysts see themselves as top class mind readers, tapping into the brain of Vladimir Putin and interpreting his every geopolitical move in a positive manner, no matter how ugly or duplicitous it may appear to be on the surface.

Putin is playing a master class chess match against the New World Order, these partisan analysts say, ignoring or downplaying anything that doesn’t conform to their Russophilic talking points.

Putin is a super secret anti-Zionist who will ‘checkmate’ Israel any day now, these dogmatists theorize with confidence, without providing a tangible piece of evidence that this is true.

Putin is a Pragmatist, Not an Anti-Zionist

Russia under Putin’s leadership has pursued a delicate balance between ideological support as well as economic and military cooperation with Israel on the one hand, and cashing in on lucrative oil, gas, nuclear energy and military contracts with several Arab/Muslim states on the other.

Spellbound Putin supporters point to the ex-KGB strongman’s whimpered public statements in support of a “Palestinian state” as evidence that he’s an anti-Zionist.[1] These lackluster analysts knowingly fail to point out that such rhetoric from the Kremlin is completely offset by Putin’s much more forthright and unequivocal proclamations in support of Israel in its current configuration.

During a meeting with a delegation of Israeli and Russian Jewish religious leaders in July 2014, Putin said he identifies with and supports the “struggle of Israel” against the native Arabs whose land and resources have been consistently usurped by European and Russian Jews who mass migrated to Palestine and then took much of it over through violence and terrorism in 1948. One rabbi at the meeting ‘blessed’ Putin’s leadership in Russia, saying it was the ‘will of god.’ Putin told the rabbis that he is a “true friend of Israel” and of its extremist prime minister, Benjamin Netanyahu.[2]

Putin has described Israel as part of the “Russian world” because 15 percent of its population is of Russian origin.[3] Despite living in Israel, many of these Russian-Israelis vote in Russian elections, and a good number of them cast their ballot for Putin.[4] At a 2011 dialogue conference featuring organizations representing the major religious and ethnic groups in Russia, Putin stated that Israel is “a special state to us” because it is “practically a Russian-speaking country.”[5] Russian-speaking Israelis form the base of the ultra-Zionist Yisrael Beiteinu political party[6], headed by Israel’s former foreign affairs minister Avigdor Lieberman who recently called for “disloyal” Arab citizens of Israel to be “beheaded.”[7]

During a 2013 joint press conference, Putin and Netanyahu both affirmed that ties between Russia and Israel are getting ‘stronger and stronger.’[8] Putin said that “our relationship with Israel is both friendly and mutually beneficial.” He stressed that Russia and Israel cooperate in a “wide variety of areas,” including political, cultural, economic and military. He proudly noted that under his watch the Russian city of Gelendzhik was twinned with the Israeli city of Netanya.

Russia has fuelled Israel’s war economy, purchasing more than $550 million of Israeli drones since Putin became president.[9] In 2010, Russia and Israel signed a five-year military contract that boosted “military ties between the two nations to help them fight common threats, such as terrorism and the proliferation of weapons of mass destruction.”[10] Increased cooperation and information sharing between Russian and Israeli intelligence services was one result of the agreement.

END_OF_DOCUMENT_TOKEN_TO_BE_REPLACED

This is potentially one of the biggest geopolitical shifts in 50 years. The West’s tired “Assad must go” narrative is wearing thinner by the hour, and Washington has descended into a panic over the very real prospect of Damascus taking back control their country. It certainly looks like a 2.0 version of Operation Cyclone.

CrossTalk asks: This Russia has made good on its commitment to start fighting ISIS/ISIL in Syria from the air. Russia is also establishing a coalition to protect the legal government in Damascus. This has caused an uproar in Washington. Can the Kremlin and the White House fight terrorists in tandem?

Russia’s Ministry of Finance has developed a new version of its proposed law that would seek to both outlaw and apply criminal penalties for activities involving digital currencies, according to a report by Russian news source Interfax.

Citing sources from within the Russian government, Interfax reports that acquiring, selling and distributing cryptocurrencies would be punishable with fines of 300,000 rubles ($4,574) or through up to 360 hours of correctional labor under the new bill.

Should such infractions be committed by an agency or group, the fines for such activities would increase to 500,000 rubles ($7,623).

The federal executive body responsible for government policy and regulation, the Ministry of Finance has been seeking to ban cryptocurrencies domestically since it introduced a draft bill in August of 2014. The measure was followed by a series of proposed fines in October, and comes amid a broader push to fight against capital flight.

via The Economic Collapse Blog
by Michael Synder
Sep 24, 2015

Right now, stock market wealth is being wiped out all over the planet, and none of the largest global economies have been exempt from this.  The following is a summary of what we have seen in recent days…

#1 The United States – The Dow Jones Industrial Average is down more than 2000 points since the peak of the market.  Last month we saw stocks decline by more than 500 points on consecutive trading days for the first time ever, and there has not been this much turmoil in U.S. markets since the fall of 2008.

#2 China – The Shanghai Composite Index has plummeted nearly 40 percent since hitting a peak earlier this year.  The Chinese economy is steadily slowing down, and we just learned that China’s manufacturing index has hit a 78 month low.

#3 Japan – The Nikkei has experienced extremely violent moves recently, and it is now down more than 3000 points from the peak that was hit earlier in 2015.  The Japanese economy and the Japanese financial system are both basket cases at this point, and it isn’t going to take much to push Japan into a full-blown financial collapse.

#4 Germany – Almost one-fourth of the value of German stocks has already been wiped out, and this crash threatens to get much worse.  The Volkswagen emissions scandal is making headlines all over the globe, and don’t forget to watch for massive trouble at Germany’s biggest bank.

#5 The United Kingdom – British stocks are down about 16 percent from the peak of the market, and the UK economy is definitely on shaky ground.

#6 France – French stocks have declined nearly 18 percent, and it has become exceedingly apparent that France is on the exact same path that Greece has already gone down.

#7 Brazil – Brazil is the epicenter of the South American financial crisis of 2015.  Stocks in Brazil have plunged more than 12,000 points since the peak, and the nation has already officially entered a new recession. 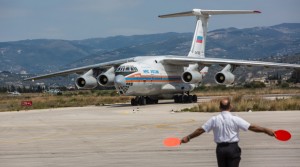 From Washington to the western media, everyone has been talking about reports of potential Russian ‘intervention’ in Syria. On the one hand, the proliferation of this meme is a case study in the western propaganda system, as one report is then repeated ad nauseam from thousands of sources, then built upon by subsequent reports, thereby manufacturing the irrefutable truth from the perspective of media pundits and western mouthpieces. On the other hand, the new reports also raise some interesting questions about the motives of both the US and Russia, as well as the other interested parties to the conflict in Syria.

In examining this new chapter of the ongoing war in Syria, two critical and interrelated points seem to rise above all others in importance: Why is the western media hyping this narrative of Russian intervention? And why is direct Russian involvement, limited though it may be, seen as such a threat by the US?